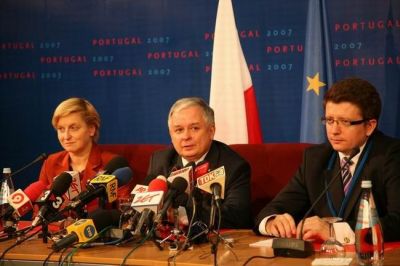 The agreement came at an Oct. 18-20 summit in Lisbon, Portugal. It will be signed in December in the Portuguese capital.
The compromise ended six years of discussions about reforms to improve the EU.

“Poland has gotten everything it asked for,” President Lech Kaczynski told the Polish Press Agency (PAP). “Thanks to the agreement, the whole reform is a great success.” The Polish delegation presented three proposals at the meeting. The most important concerned the so-called Ioanina mechanism.

Poland demanded that the policy-blocking mechanism be included in the EU’s legal protocol.

The document guarantees that all changes require the unanimous consent of all members of the EU, including Poland.

The Ioanina compromise first surfaced in 1994 and allows a minority group of states disagreeing with a resolution to freeze it for a considerable period of time.

In Lisbon, it also was agreed that Warsaw will have, as will the other big countries, its own permanent advocate general on the Court of Justice of the European Communities.

Moreover, Poland failed to increase the number of the euro deputies in the European Parliament.

According to the press, the agreement in Lisbon was an EU victory, not Polandcs. Donald Tusk, the leader of Platforma Obywatelska party (Civic Platform), said: “The real success is that finally the Polish delegation wasn’t be an obstacle in EU’s negotiations. At last, we take a step in the right direction to regain trust and I appreciate that.”

The new treaty is scheduled to come into force on Jan. 1, 2009.
Only Ireland has opted for a national referendum on the treaty. The other EU members ? remembering France and Holland two years ago and their rejection of the Constitutional Treaty ? prefer ratification by national parliaments.

The Reform Treaty contains many articles from the rejected Constitutional Treaty ? for example, a smaller European Commission, with fewer commissioners than there are member states; and a politician chosen to be president of the European Council for two-and-a-half years, replacing the current system where countries take turns at being president for six months.