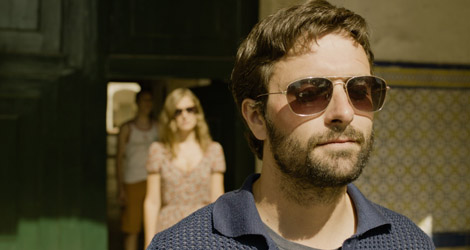 Small wonder that Andrzej Jakimowski’s latest offering received a chorus of praise at the Toronto International Film Festival. It is indisputably one of the most impressive artistic statements on blindness in recent years, along with Artur Żmijewski’s Blindly (2012). While Żmijewski filmed blind people attempting, and failing, to paint and outline objects, Andrzej Jakimowski uses the camera to display a world of new possibilities for them.

The plot is built around the character of Ian (Edward Hogg), a spatial orientation specialist hired by a private school for the blind in Lisbon’s Old Town district. The teacher does his best to popularise echolocation, a technique that allows the blind to perceive objects by producing sounds and listening to the echoes. His method, however, is greeted with scepticism by the school’s director. Ian and the charmingly fragile Eva (Alexandra Maria Lara), study, smell and then touch each other before entering into an affair. The Polish cinéaste directs the camera at the feet of the lovers to suggest a form of sensuality between them that lacks the element of sight.

Throughout the film, Jakimowski wonderfully evokes the tension resulting from off-screen, literally out of sight, threats to which the characters are continuously exposed and the enigmatic cityscapes à la De Chirico, immersed in the sunlight of Southern Europe, confirm cinematographer Adam Bajerski’s talent.