Krakow is now the best place in Europe to sample Polish craft beers, and brews from independent beer makers around the world, but just five years ago it was almost impossible to find anything on tap other a handful of bland, gassy lagers. It has been a lightning revolution that shows no sign of fizzling out.

In the years after the fall of Communism in Poland, multi-nationals such as Heineken and Carlsberg quickly gobbled up the few remaining national breweries. These companies used their marketing muscle and scale to convince Polish bar managers to stock the ‘must-have’ brands. Nearly all these beers were pasteurised lagers of similar strength and taste. For the discerning beer drinker in Krakow, the situation was dire.

About five years ago, a small number of entrepreneurial pub owners in Krakow decided to turn the accepted pub business model on its head. Instead of selling mainstream beers, they focused instead on providing beers from regional and independent breweries. Consumer response was overwhelmingly positive and, before long, these bars began to build loyal followings. 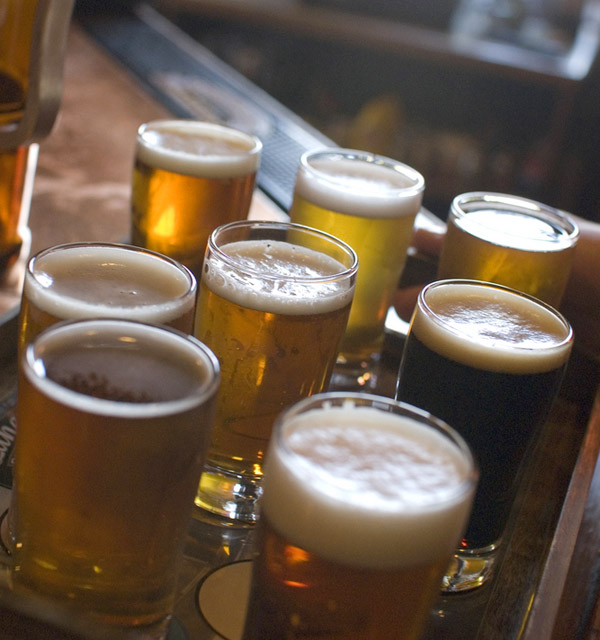 The hugely popular Omerta Pub in Kazimierz started selling bottled beers from smaller Polish breweries in 2008. They have since added 30 draught taps (including British style hand pumps), expanded into the premises next door and created a second bar serving a diverse range of international beers. Jarek Guzda, Omerta’s visionary owner, said: “By focusing on craft beers, we began attracting lots of customers who appreciated choice, quality and presentation.”

House of Beer has achieved similar success in the heart of the Old Town. Although only approaching its third anniversary, this fashionable drinking palace has stocked over 400 beer brands to date, and has over 200 beers available every day. Overwhelmed with customers, House of Beer has also expanded, this time into a large cellar. Owner, Dona Sienkiewicz, described the secret of their success: “From day one, we wanted to put the emphasis on beer, providing real choice in a friendly atmosphere with knowledgeable staff.”

Omerta and House of Beer are not the only soldiers in this revolution. Other celebrated drinking havens include Sarmacja, Non Iron, BeerGallery, Strefa Piwa and Chmiel, to name just a few. All these pubs have dedicated themselves to beer quality and diversity, and have become the kind of places where conversations about the latest premier are as likely to be about newly released beers as they are films.

While the dedicated ‘beer pubs’ have been the catalysts for change, it is the myriad of other pubs that now provide the scale. A growing number of savvy pub managers have been adding beers from regional, independent and foreign breweries to their range, sometimes alongside mainstream lagers. Krakow had only three pubs selling regional beers in 2009 – today it has more than 50. Kuba Wojdyło, co-founder of the trendy Poligamia bar, said: “More and more people are becoming interested in good beer. Having a varied selection helps us to attract beer fans, as well as casual drinkers.”

The perception of beer culture as being male dominated has also changed in Krakow. It is not unusual to find as many female beer fans sampling the latest IPA or Milk Stout as guys. Bar owners have noted that female drinkers in Krakow undoubtedly account for a large percentage of the growth in regional beers sales.

Krakow’s brewing scene has also changed rapidly. In January this year there was a single brewery in the city (C.K. Browar). Then in March, Stara Zajezdnia, the first new brewery in Kazimierz for many years, started producing. A range of unpasteurised beers, inspired by a Czech master brewer, is now being served to appreciative drinkers inside a vast former tram depot. Next in line will be Pracownia Piwa, a new Krakow micro-brewery co-established by home brewer Tomasz Rogaczewski. The home-brewing scene has flourished in Krakow for many years, and Tomasz is unlikely to be the last local enthusiast to step up to commercial brewing.

The Internet is also playing an important role. With the emergence of Facebook, and websites such as BeerPubs.pl, regional craft breweries and pubs are finding it easier to reach beer fans outside their local areas. BeerPubs.pl is the first Polish website to pull everything together for both enthusiasts and casual fans; providing information on more than 750 Polish beers, the best pubs, beer festivals, breweries, news and events. The fact that it was conceived in Krakow is another example of how the city is influencing beer culture at a national level.

The backdrop to the beer revolution in Krakow has been a change in the image of the drink in Poland. Beer is no longer regarded as a drink for the streets, and is much more likely to be considered a refined, crafted beverage. This has helped beer sales nationally, with regional and independent breweries leading the way. Many brewers, large and small, have responded by becoming ever more experimental with their new brews, fuelling interest and adding to the variety of Polish beers available.

Krakow, a city established as a centre for culture, beauty and festivals, can now raise a glass and celebrate another accolade – as the beer capital of Poland.