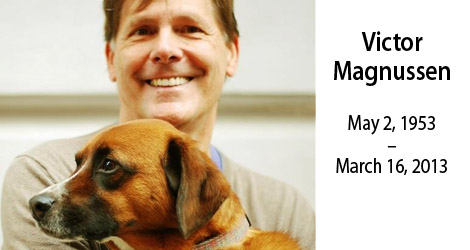 A concert has been organised at Krakow’s Café Szafe, in memory of the singer and songwriter Victor Magnussen who died suddenly while on holiday in March. He was 59.

Victor, rarely seen without his dog Bernie, was a regular performer at Szafe and other venues around Krakow. He had many friends in the city, and was known for his warm and open personality.

A keen traveller and adventurer, Victor had recently returned from a trip to Africa, and was once again on the road, heading for a grand tour of South America, when he had a heart attack. It happened on March 16, while he was ski-ing at Lake Tahoe, Nevada, where he had stopped to spend time with friends en route to Brazil.

The following day the authorities in his home town of Vancouver, Canada, were helping Victor’s widow Marilla to organise the return of his body to Canada. He was cremated at dusk, on March 20.

Friends from Krakow and around the world paid tribute to Victor, posting messages on his Facebook page and offering words of support and condolence to Marilla.

His friend Roy Maltby, a fellow Canadian who runs Krakow’s long-standing English Language Club on ul. Sienna, said of Victor: “I first met Victor when he came to a meeting of the English Language Club. He came to the weekly meetings regularly, usually with his dog Bernie. He was very popular at the meetings and gained fans for his concerts. At the meeting the day after news of his death spread in Krakow, people talked about their shock and sadness.”

Mariusz Biel, another friend of Victor, added: “This is a great loss for everyone. He was an outstanding man with a great personality. I personally will miss having Victor and his dog Bernie amongst us.””

Victor’s own final message was posted on Facebook on March 15. It read: “I am sitting at the McDonalds in Redding California, getting ready to head to Squaw Valley to meet a friend. I tired as hell. Drove most of the night, except for about 3 hours at a rest stop outside Medford Oregon. Roads are good, its sunny and temps. are cool but not cold. Last night I played a few songs at the Sellwood Pub in Porland and was originally going to sleep there but then got a bee in my butt and decided to drive till I felt too tired…””

The memorial concert will take place at Cafe Szafe, on April 20. Anyone is welcome to participate, or simply to go along. Doors open at 7.30pm, and admission is free. See www.cafeszafe.com for more information.

Victor had been planning to return to Krakow sometime in May, and his dog Bernie is currently being looked after by a friend.

Photo: Victor Magnussen and Bernie the dog, by Analía Szuldman
part of Juan M Sarabia’s Myself, My Neighbourhood project.

One thought on “Remembering Victor Magnussen”