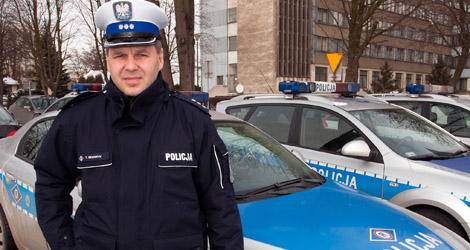 You see them on the streets, you see them in your rear view mirror. Few drivers are happy to see the traffic cops, but for Tomasz Seweryn, Deputy Commander of Krakow’s Traffic Police (Policja Drogowa), they are there first and foremost for your safety.

The Krakow Post spoke to Seweryn about his work, and about his determination to make Poland’s roads safer.

At the beginning of his career, Seweryn worked directing traffic on the streets of Krakow. It took a little longer to get his hands on a patrol car. “To become a traffic officer, you first have to undergo specialist training, and only then can you drive police cars, so it took another year and a half. Fortunately, my assessments were good enough that I was one of the first officers in the country to be assigned to unmarked patrol cars.”

Now that most of his work is done from behind a desk, Seweryn says he misses being at the wheel of a patrol car. “I miss it very much, so I’m always looking for opportunities to take part in activities on the roads. I’m known as having a knack for spotting drunk drivers. I’m proud of my record of stopping more than 150 drunk drivers every year.”

Throughout the interview, Seweryn emphasises that it is the goal of the Traffic Police to help drivers and other road users. He is aware that it is hard to build a favourable image for an organisation that sometimes gives out fines and other penalties, but regards it as very important that road users are made to understand that the police are in their service.

Tomasz Seweryn: It is a very old tradition. If you watch films from the 1970s, you will see it even then. This is how all police officers have been trained in Poland for years. By the way, you can always recognise Traffic Police by the white hat, the white gloves and the ‘R’ on their sleeve badges and the badges on their cars [‘R’ for ‘ruch’ meaning ‘traffic’]

KP: What unusual features of Polish traffic law should foreign drivers be aware of?

TS: Drivers must carry their driving licences at all times. I know this is different in other countries. They should also know that not every traffic accident must be reported to the police. Polish traffic regulations say that you don’t have to report an accident to the police if nobody has been injured. Of course, insurance companies may want a police report, but it is not a legal requirement.

KP: There is a popular theory among foreigners living in Krakow that you are better not reporting an accident to the police, because you will automatically be fined. Is that true?

TS: Absolutely not true. The only question the police will consider is who is to blame for the accident. If someone has been driving dangerously, of course the police may take action, but not otherwise.

KP: Foreigners living here may not be aware that it is illegal to ride a bicycle under the influence of alcohol in Poland. What are the limits?

KP: How do you find dealing with foreign drivers?

TS: One very interesting thing is that, when we stop British drivers for being drunk, they first start to cry and then, after a few seconds, start to shout. This is something experienced by many Traffic Officers, and it happens most often in Kazimierz.

KP: Have you seen the recent film Drogówka (Traffic Police)? Do you think it made the police look bad?

TS: Of course I’ve seen it! For me it was like an action film. It was amusing, but it can’t really be compared with real police work. I am afraid of how it might affect the image of the police. People shouldn’t believe everything they see on the screen, or read in newspapers.

KP: There is sometimes a perception that Polish police are there to control, rather than to help. Why do you think this is?

TS: I want to emphasis again that we are here to serve the public, not to control them. Speaking for the Traffic Police, we try to be very visible. We have a very vigorous campaign against drink driving and we stop and check over 50,000 vehicles every month in Krakow alone.

KP: What message would you like to send to our readers?

TS: First of all, I would like to warmly invite all readers of the Krakow Post to come and visit Poland. Our Traffic Police are trained to be friendly to foreign drivers and to treat them well. If you need to ask for help but don’t speak Polish, we will do our best to serve. I would like to emphasise that we are doing our best to change the mentality of Polish drivers, so that they behave well abroad. The final thing I would like to say is, if you’ve been drinking, please take a taxi!

15 thoughts on “Krakow Traffic Police: “We are here to serve the public, not to control them””