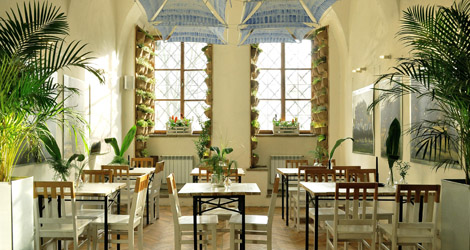 Hamsa, or to give it its full and somewhat unwieldy name, Hamsa Hummus and Happiness Israeli Restobar, is a new Middle-eastern restaurant in Kazimierz that fills a Rift Valley–sized gap in the Krakow dining scene. Up until now, lovers of Israeli and Middle-eastern foods have had to make do with the odd glorified kebab shop, bagel cafes or the phalanx of pricey Jewish restaurants, generally aimed at the tourist market, clustered around ul. Szeroka. What these restaurants tend to do well is serve up pre-war eastern European Jewish fare in an authentic manner, without really attempting any dishes that come from the Levant. This is what Hamsa does attempt, with a touch of Moroccan thrown in for good measure. 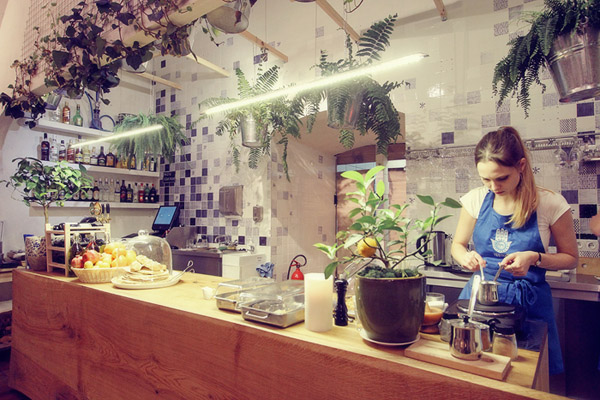 ‘Hamsa’ means ‘peace’ in Arabic, and the restaurant’s logo is the hand of Fatima, a symbol of good luck seen all over the Middle East. The place was almost completely full when we arrived at 9pm on a Thursday evening – a good sign of quality. First impressions were bright, friendly, relaxed and welcoming. The décor is as you would find in restaurants in the Middle East – low-key but tasteful. Tie-died lampshades, various herbs growing by the window, wooden tables and chairs and prints of Israeli scenes adorning the walls. Relaxing Middle-eastern melodies sooth you while you eat. Laughter and chatter filled the air from several large groups of young-looking people populating the eating area.

We were served quickly by a helpful waitress, who gave us a wine aperitif – a decent Israeli house red called Monfort Carigan – and started with four mezze – dips and snacks that come with olives, chilli peppers, gherkins, and manakish bread baked on the premises. We had Jebneeh (fried goats’ cheese), Babaganoush (a dip made from roasted eggplant), Muhammara (a thick dip of ground, roasted walnuts, pomegranate juice and spicy pepper), and hummus with fried lamb and roasted pine nuts. Priced between 7 and 12zł, these starters are substantial, could serve as a filling snack, and were prepared to perfection.

My favourite was the Muhammara, which, having tasted and loved while travelling through Syria, I can honestly say was close to perfection. The hummus with Bieszczady lamb was also impressive – a real taste of the Middle East, and as good as it sounds. I followed this up with a salad, lamb on eggplant with pomegranate and mint sauce, while my partner went for a Moroccan soup of chickpeas, beef and orzo pasta. My salad was astoundingly good, and the flavours of the sweet aubergine, crispy lamb, mint and bitter pomegranate together were a thing of subtle genius. 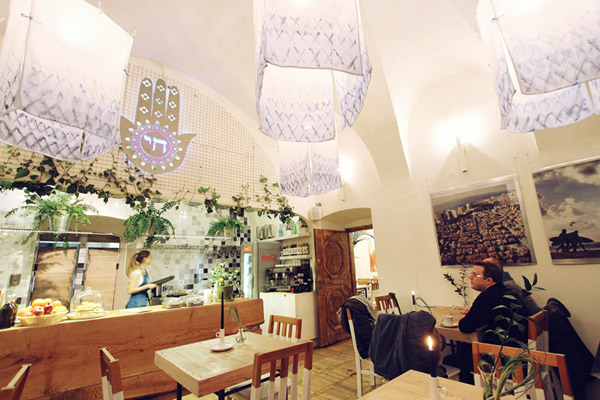 Perusing the wine list further, I noticed they had a Polish dry white, five Israeli vintages and three Armenian – an unusual selection, priced between 48 and 98zł. Instead, I went for a micro-brew beer from Radom – one of several on offer.

My main course was a meat dish called Near Eastern Beef Sirloin, priced at 39zł. The beef was marinated in baharat – a mix of Arabian spices – with lemon juice and olive oil, and came with potato wedges and Israeli salad. It was tender, fresh and tasty, and the portion was more than adequate. My partner’s Levantine chicken – large legs roasted with shallots, lemon and parsley – looked quite mouth-watering.

There was little room left for desert, but I tried a small selection of cakes. The Baklava was honey-based and delicious, the Near Eastern chocolate cake temptingly tasty and the Kanafeh, a Palestinian desert made from kadayif cake, nabulsi cheese, atar syrup and saffron, calorific and captivating. I rounded the meal off with a Bedouin style coffee with cinnamon, feeling as rich and satisfied as an Arab prince. Hamsa then – hands down the best Middle Eastern restobar in town.

4 thoughts on “Drop In: Hamsa Hummus and Happiness Israeli Restobar”