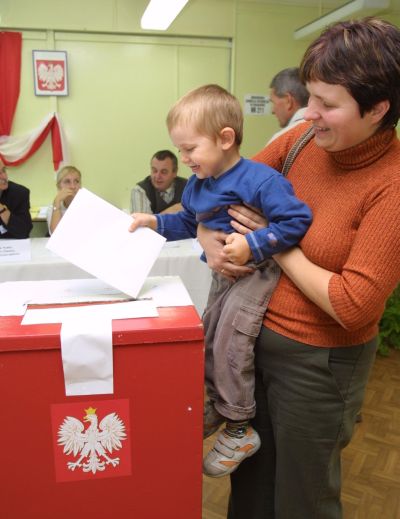 As the heated campaign enters its final stage, opinion polls suggest the winner will be the more moderate of the two conservative parties, the Civic Platform Party. The polls also show that no party will have a majority of seats, so another governing coalition will have to be put together. Sadly, polls also show that only about 50 percent of eligible voters plan to cast ballots. The party that currently holds the reins of government, the ultra-conservative Law and Justice Party, has been in a neck-and-neck race with the Civic Platform Party since June, according to polls.

The consensus of the latest polls conducted by several organizations is that the pro-business Civic Platform Party will get 40 percent of the vote. The nationalist Law and Justice Party will receive 35 percent, according to the consensus. The polls indicate the Left and Democrats will be a distant third with 13 percent of the vote and the Polish Peasants’ Party will be in fourth with 6. If the poll results hold true on election day, neither party will reach the 5 percent threshold of the national vote needed for seats in parliament. The government coalition that the Law and Justice Party’s Kaczynski twins put together two years ago began unraveling this year after months of disagreements and scandals.

The 2005 election had failed to give any one party a majority in parliament so Jaroslaw Kaczynski cobbled a coalition with populists and far-rightists. Jaroslaw Kaczynski, the twin brother of Lech Kacz-ynski, the Polish president, became prime minister of the government. When the coalition became unworkable this summer, parliament voted to dissolve itself two years ahead of the next scheduled vote. An election was called for this month. Both the Civic Platform Party and the Law and Justice Party have many ex-Solidarity trade union members. Although both are conservative, they differ on what to do with the economy and on relations with the EU. Both the Civic Platform Party and the Law and Justice Party want to see Poland’s economic boom continue. Donald Tusk is head of the center-right, pro-business Civic Platform Party. It represents Poles who value a free-market economy and competition. Its backers are better educated and younger than Law and Justice Party supporters.

The 2005 parliamentary election made the Civic Platform Party the largest opposition party. Tusk, a candidate for president in 2005, says Poland should be doing more to stop its citizens from emigrating to Britain, Ireland and other countries for better jobs. He also says Poland should make relations with EU countries a priority. The Civic Platform Party hopes to form a governing coalition with the Polish Peasants’ Party, which represents farmers and agricultural workers plus residents of rural areas and villages. The Law and Justice Party represents voters who want a free-market economy but also a strong state, a traditional social order and a tough posture on crime and corruption. It was created in 2001. It has ruled the past two years with the populist Self-Defense Party and the far-right, nationalist League of Polish Families. The alliance alienated many Poles and sparked alarm abroad. This time neither of the parties is expected to get enough votes for seats in parliament, however – so a Law and Justice coalition with them is probably out. Critics of the Law and Justice Party say it has focused too much on the past, including trying to expose former Communists. They have also accused it of going too far in hunting some government-business alliances at all cost. They have even accused it of using special services (like Central Anticorruption Bureau) to fight with their political opponents. Its opponents say it views Polish society in a very simplistic way as divided between two camps: those in the unified, post-Solidarity, “morally pure” Poland versus those in the liberal, post-Communist, spoiled Poland.

Critics also contend that the Law and Justice Party has made foreign-policy mistakes that have hurt Poland’s relations with several EU countries, especially Germany. Many of the party’s supporters are older and less educated. The controversial Catholic priest Tadeusz Rydzyk, leader of the ultra-conservative, anti-EU radio station Radio Maryja, has been a key supporter of Law and Justice. The Left and Democrats is a loose alliance between former Communists who used to be in the Democratic Left Alliance and center-right parties, also known as Democrats. It is a European-style social-democratic party whose platform combines concern for working people with a responsible state fiscal policy. A coalition with ex-Communists would be controversial and risky for either the Civic Platform Party or Law and Justice Party. The left earned a reputation for corruption while governing between the time of Poland’s independence in 1989 and 2005, when voters punished it at the polls.

Former President Aleksander Kwasniewski is a strong supporter of the left – and is considered one of the few politicians capable of rebuilding it. The two minor parties that have been part of the coalition government between 2005 and today – the Self-Defense Party and the League of Polish Families – are believed to have a very slim chance of getting enough votes for seats in parliament this time. Most of those who supported the parties in 2005 are now backing the Law and Justice Party, according to polls. The League of Polish Families has ultra-conservative, nationalistic views. The league favors pro-life policies, private property and such traditional values as religion and patriotism.

The Self-Defense Party, run by Andrzej Lepper, appeals to voters in rural areas and less-populated provinces, the unemployed, former state farm workers and unskilled workers. It is a populist party with a reputation for vociferous public protest, including disrupting parliamentary proceedings. The best-known League of Polish Families politician is Roman Giertych, the former minister of education, who is famous for introducing uniforms in school.