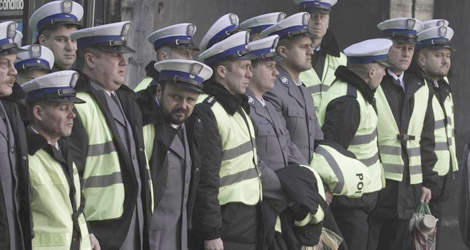 Despite the frequent cases of corruption among traffic cops reported in local newspapers, Wojciech Smarzowski hasn’t tarred all Polish police with the same brush in his latest feature. Drogówka (Traffic Police, 2013) is a group portrait covering seven days in the lives of seven policemen, each of whom embody one of the seven deadly sins. The vices of individuals, however, hardly stand out in Smarzowski’s depraved world, peppered with references to bunga bunga parties and football match-fixing scandals.

In addition, as the director himself explains, Drogówka is also a movie about: “the stupidity of drivers, the absurdities of the highway code, traffic jams, motorways and the reality of potholed roads.” Smarzowski and his trusted editor, Paweł Laskowski, took great care to assemble a mixture of low-fidelity, real-life footage from camera cars and mobile phones. The jump cuts in the movie show that his visual style has become more nonchalant through the years. The school trip-like bus journey taken by the inebriated policemen clearly evokes the wedding bacchanal of guzzling guests from Smarzowski’s first hit, Wesele (The Wedding, 2004).

This time around, the Polish cinéaste proved to be more restrained, at least when dealing with funerals scenes. As usual, his characters are simultaneously repulsive and genuinely charismatic. Smarzowski’s triumph is that the grotesquery is never merely descriptive, but revealed dynamically in the plot.