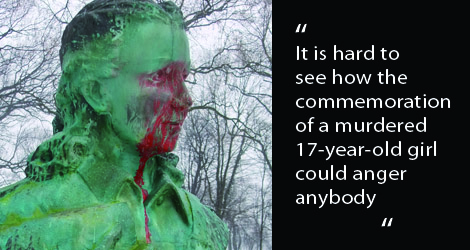 Sometime on the night of Friday February 15, person or persons unknown entered Jordan Park and defaced the commemorative bust of Polish wartime heroine Danuta Siedzikówna with daubs of paint.

One of several dozen monuments to prominent Poles in the park, including controversial military figures, Siedzikówna was an odd choice of target for a vandal’s ire. Better known by her World War II nom de guerre ‘Inka,’ Siedzikówna is widely regarded as a paragon of Polish patriotism.

After serving as a medic in the Polish Home Army (Armia Krajowa), she was executed by firing squad six days before her eighteenth birthday on the orders of the Communist secret police. 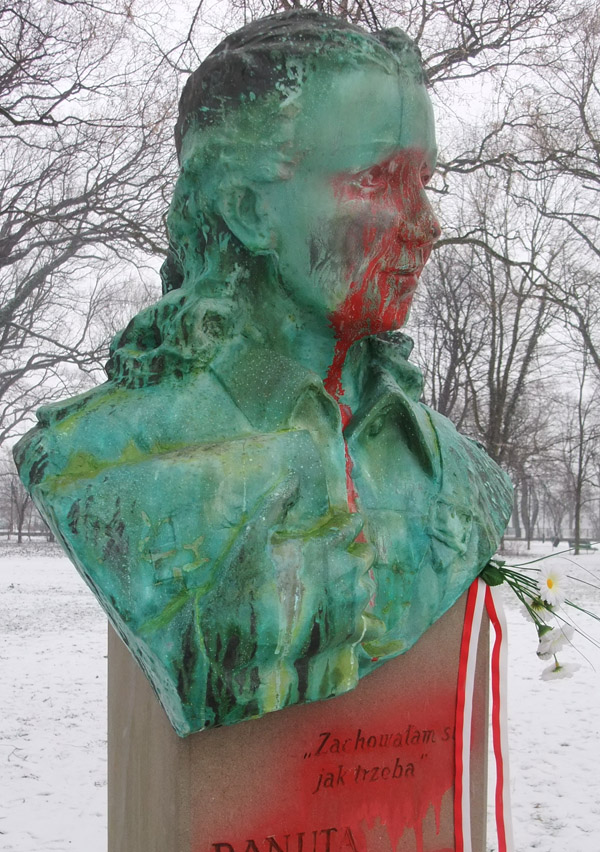 Another bust in Jordan Park, that of Cold War spy Ryszard Kukliński, was defaced in 2011 and again in 2012. Though no less alarming, the attack on the monument to Kukliński was perhaps less surprising.

Serving in the Polish Army during the 1960s and 70s, Kukliński became disillusioned with the Communist regime and began passing high-level Soviet and Polish military secrets to the United States’ Central Intelligence Agency.

Spirited out of Poland on the eve of the declaration of Martial Law in 1981, Kukliński fled to the United States with his wife and two sons. He was sentenced to death in absentia by a Polish military court – a ruling that was overturned after the fall of Communism on the grounds that he had been acting under ‘special circumstances.’

Kukliński’s exoneration was not universally welcomed. As recently as 1997, a poll found that only 27 percent of Poles regarded the former colonel as a hero, while 24 percent continued to see him as a traitor. In the 2012 attack on his monument in Krakow, vandals struck through the rank ‘colonel’ above his name and scrawled ‘traitor’ beneath.

A group claiming responsibility for the defacement of Kukliński’s bust sent an unsigned email to Polish daily Gazeta Wyborca, in which they claimed: “This action is an expression of opposition to the cult of traitors… Putting his bust in the vicinity of dedicated Polish patriots… we consider to be an attack on the very foundations of the nation.

No such claim of responsibility has been published for the attack on Danuta Siedzikówna’s monument, and it is hard to see how the commemoration of a murdered 17-year-old girl could anger anybody.

Danuta Siedzikówna was born in 1928 near the eastern Polish town of Bielsk Podlaski. Her father had been exiled to Siberia under the period of Russian rule and was once again arrested by the NKVD and deported in 1940. He died in Tehran after joining Anders’ Army. Danuta’s mother joined the Home Army and was executed by the Gestapo in 1943.

Aged just 15, Danuta also joined the Home Army, along with her sister Wiesława, shortly after the death of their mother. She received medical training and was attached to the Wilno Brigade. As the tide of World War II changed and the advancing Red Army took eastern Poland from German forces, Danuta returned to civilian life to work in the Forestry Inspectorate. 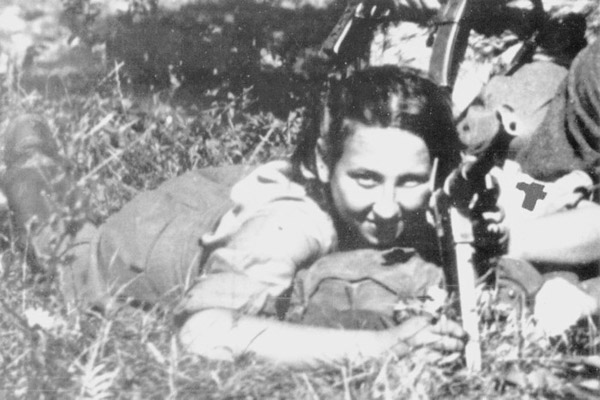 The arrival of the Soviets was not welcomed by all in Poland and elements of the Home Army formed a loose anti-communist alliance that fought to prevent Russian domination. Many who had served in the Home Army found themselves under suspicion from the Communist authorities, and Danuta, still just 17, was arrested in 1945.

Liberated from a prison transport by the anti-Communist underground, Danuta joined the partisans and continued to serve as a medical orderly with several groups of what the authorities were now calling the Accursed Soldiers (Żołnierze wyklęci).

Siedzikówna was arrested again in July 1946, while on a secret mission in Gdańsk. She endured torture and beatings, but refused to provide the names of her compatriots. In short order, Danuta was tried for playing an active role in an armed attack on members of the Department of Security (Urząd Bezpieczeństwa) – the Communist secret police.

Even for a Stalinist show trail, the evidence presented against Siedzikówna was ludicrous. Despite testimony from a member of the secret police unit that had come under attack that Danuta had given him first aid during the firefight, she was convicted and sentenced to death. She refused to sign a request for clemency that her lawyers submitted to then President Bolesław Bierut, and was shot on August 28, 1946.

Although the Home Army is now feted in Poland – no Polish town is without at least a major thoroughfare named in its memory – the standing of those Poles who continued the fight into the Communist era remains unclear. The Accursed Soldiers persisted with their resistance into the 1950s and the last, Józef Franczak, was killed in 1963.

The proposed erection of a monument to the Accursed Soldiers recently caused controversy in Zielona Góra. Some members of the city council argued hotly that many of the attacks carried out in the name of the Accursed, and that resulted in the deaths of women and children, were no more than opportunist acts of gangsterism. The motion to build the monument was passed, by 14 votes to nine.

Back in Krakow, plans to construct a grand monument to the Home Army have stalled after a jury failed to select a winner in a competition to find a design. Three designs for the installation to be erected on the bank of the Vistula near the Dębnicki Bridge, were deemed worthy of further development, but there are now doubts that the project can be completed in time for the planned September 2013 unveiling.

In Jordan Park, painstaking and time-consuming work will be needed to restore the monument to Danuta Siedzikówna, defaced in a few seconds of paint flinging. All around, beside the pathways that crisscross this delightful urban green space, plots have been marked out for new monuments, and empty plinths await the heads and shoulders of more of Poland’s greats. Whichever bronze visages end up gracing these positions of prestige, it’s a good bet that their presence will offend some strand or other of Poland’s tangled recent history.