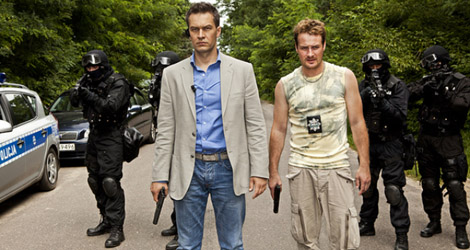 Strangely enough, despite his unquestionable versatility, Michał Żebrowski wasn’t given the chance to play an action hero on the big screen until last year. His opportunity finally came thanks to Eugeniusz Korin, his partner at the head of the Warsaw-based 6th Floor Theatre. Korin had the resources needed to make a good job of his debut movie, including an impressive cast of actors and an agreement with UK trip-hop band Archive for contributions to the soundtrack.

The only thing Korin, who has devoted his life to theatre, may be reproached for is that he decided to script the thriller himself. Żebrowski plays a super-cop, the titular Vulture, who puzzles over the mysterious disappearance of criminals by writing meaningless mathematical equations on a blackboard. This pseudo-intuitive, mad inspector-like approach to investigation is hardly plausible from a narrative point of view. The investigation is, in fact, conducted in a linear manner simply by using a process of elimination.

Despite the shortcomings of the screenplay, Korin has proved that filmmaking is more than a hobby for him. He builds a visually valid movie around the moral dilemmas complicating a criminal investigation led by a super-cop with mental powers. Neither the clever old dog Bożek (Daniel Olbrychski) nor the hot-headed younger agent Robaczewski (Paweł Małaszyński) can help the Vulture solve a difficult case in a morally-decaying version of Warsaw. Fun is guaranteed, provided the audience is not expecting a Polish David Fincher. Korin’s debut movie also had a limited theatrical release in the UK and Ireland.