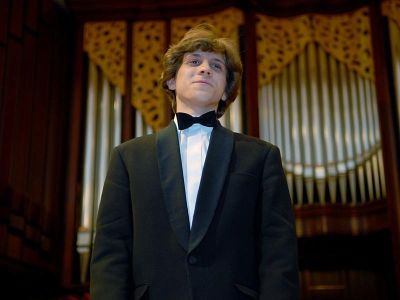 The album contains the recordings of all “Preludes” and two “Nocturnes” Op. 62 by Frederick Chopin.Blechacz was born in Naklo  in 1985 and began playing piano at age 5. Very early on, he started to win local and international pianist competitions. This year he graduated from the Music Academy in Bydgoszcz, Poland.Blechacz was 20 when he won the Chopin Pianist Competition. He gained a reputation of being a modest, extremely gifted artist “playing Chopin like Chopin himself.” He was the first Pole to win the prestigious contest since 1975, when the honor went to Krystian Zimerman.

The competition victory marked the beginning of Blechacz’s worldwide pianist career. Deutsche Grammophon offered him a lucrative five-year contract, making him the only other Polish pianist to work with Deutsche Grammophon after Zimerman.After the Warsaw competition, Zimerman offered to assist Blechacz with his expertise of Chopin’s music. The two artists worked together on details of Chopin’s interpretations, which Blechacz stated was a valuable and helpful process.The set of 24 short pieces titled “Preludes” was composed from November 1838 until January 1839, when Chopin, together with George Sand and her two children spent their holidays on Majorca to escape the damp Paris weather. The variety of very intensive emotions within the cycle is a challenge for every pianist.

It is also significant to achieve inner cohesion for the whole set of Chopin’s “Preludes” demanding great technical skill and virtuosity.This album is confirmation of Blechacz’s outstanding talent. We can admire his elegance, brilliance and sense of nostalgia, restrained from needless experimentation. He presents the music’s beauty with his extraordinary musical sensitivity. Blechacz pursues his own idea of interlinking the short pieces into an entire, consequent set.Blechacz, a great virtuoso, provides his own understanding of Chopin’s music, its emotions and its form. In his interpretation we find much from romantic poetry but in classical proportions. He plays with youthful emotions without any controversy or exaggeration. This naturalness, moderation and subtle emotion, creates an atmosphere of intimate engagement with Chopin’s music and Blechacz’s artistic world.

Though some music lovers decry his immaturity and lack of experience, they are unable to deny that his musical interpretation is a real artistic treat.Chopin’s album by Blechacz was released October 1, and the second day after it premiered, it achieved “gold record status.” His next album will be devoted to Mozart and Haydn.