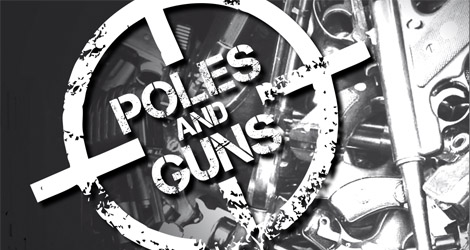 When a small town that is unnoticed by any but its inhabitants and neighbours becomes national news, it is often because of a serious or shocking incident.

Such is the case with Sanok, population approx 39,000, which lies roughly 200km east of Krakow in the Podkarpacie region. Early in January the town – capital of Sanok county but by no means a household name – witnessed a murder, two suspected suicides and a siege that involved police, anti-terrorism officers and helicopter support from Warsaw.

Police went to an apartment at ul. Cegielniana 14 in Sanok on the morning of January 10, to arrest Andrzej B. on suspicion of murder. He was wanted in connection with the death of 29-year-old Krystian L,. whose body had been found outside a church a day earlier. He had been shot in the back of the head.

Andrzej B. opened fire on police vehicles from his apartment window, forcing officers to pull back, evacuate the neighbourhood and close schools. Back-up arrived from the capital, along with anti-terrorism officers, and a siege began that would continue until the early hours of the next morning.

When police finally decided to enter the apartment they did so without firing a shot, and found two bodies inside. One was Andrzej B., 32, the other his 17-year-old girlfriend Kamila M. Both had gunshot wounds to the head. Initial autopsy reports suggest a double suicide moments before police entered the apartment, but a full report has not yet been published.

Sanok’s Prosecutor said that a handgun and spent ammunition had been found close to the bodies, and that a hunting rifle was also found at the apartment. Firearms experts in Krakow are studying the guns, but have not yet confirmed whether the weapon used in the murder of Krystian L., and the deaths of Andrzej B. and Kamila M., was the same.

What is known is that Andrzej B. could not have been properly licensed to own the guns. Polish gun law states that nobody with a criminal record can obtain a licence, and, while mistakes are sometimes made in the issuing or revocation of licences, Andrzej B. is known to have had convictions for drug, assault and theft offences.

Anyone wishing to obtain a gun licence in Poland must also undergo a psychological evaluation, and explain why they want a gun (sport, hunting and self-defence are all acceptable, but in the case of the latter it must also be shown why the applicant believes their life to be in danger). There are further restrictions, including a ban on issuing licences to under-18s, a limit on the amount and type of ammunition that may be kept, and a requirement to demonstrate an understanding of gun safety.

All of this means that the number of guns per capita in Poland is among the lowest in Europe, at around one per 100 people.

According to the Small Arms Survey, an independent, internationally-recognised research organisation based in Geneva, there are about 500,000 privately-owned, legal guns in Poland. This places the nation very low in both European and world rankings. Amongst Poland’s neighbours (excluding the Russian enclave of Kaliningrad), Germany has the most privately-owned guns, numbering some 25 million. Next is Ukraine, with around three million, followed by the Czech Republic (1.6 million). Belarus has around 700,000 private guns, Poland’s half million is next, then Slovakia with 450,000 and Lithuania, with about 130,000. By comparison, there are around four million private guns in the UK, and 270 million in the United States.

A spokesman for Małopolska police gave the Krakow Post a breakdown of gun ownership in the region. He said that there were 11,712 gun permits but, because one permit allowed ownership of multiple guns, the number of legally held firearms in Małopolska was close to double this figure, at 20,078. Of these, there were 459 licences for personal weapons (512 actual guns), 8,442 hunting weapon licences (15,950 guns), 965 sports licences (1,744 guns) and 1,846 licences for gas propelled ‘BB’ weapons (1,872 guns).

For those who hold a licence, there is no shortage of outlets selling legal guns and ammunition. But given the Sanok tragedy and Andrzej B.’s criminal past, it does not seem that legally held guns are a source of concern. Of course there are times when they are misused. One example took place in Warsaw, shortly after the Sanok incident. A former police officer suspected of stabbing his wife was surrounded in his Praga apartment on January 15. The siege ended when the 42-year-old shot himself. The Polish press agency PAP reports that the man killed himself with his former police issue gun.

And, in Krakow, one of the highest-profile cases involving the use of a legal gun took place in August 2006, when Adam B. shot his ex-girlfriend, her father and a male friend in a bar on ul. Sarmacka. Only the woman’s father survived the attack, and Adam B. shot himself dead in the street after the incident.

In this case, the gunman did have a licence for his weapon. However, a court later ruled that his licence should have been revoked before the incident, because he had already threatened to kill his girlfriend. It is a mark of just how seriously Poland takes mistakes of this kind that the then chief of police in Małopolska was sacked, and two other senior officers were prosecuted. The police department was also ordered to pay compensation to the family of the male friend killed in the bar.

Accidents happen too. In October 2011 a 40-year-old man shot his wife dead on a hunting trip in Silesia, claiming that he mistook her for a wild boar in the darkness. He was proven to have been sober at the time, and to have held the correct licences. But, like crimes involving legal guns, accidents with licensed weapons do not happen often. In Małopolska at least, gun accidents are so rare that police do not keep statistics about them.

Gun crime, by its very nature, is difficult to quantify. In 2012, Małopolska police recorded 108 robberies in which guns were reported to have been used. However, a spokesman for the police said that this figure might be distorted. He said: “As a proportion of these attacks is not detected, we assume that there may be a live weapon, but in reality it often turns out that it is an imitation weapon.”
As for the number of illegal guns in Krakow – it’s anyone’s guess. The police spokesman said: “We do not have the number of ‘dark’ [illegal] weapons… as it is not possible to quantify this in a real way.”

The Sanok incident certainly backs up his statement. It was impossible for police to have known about Andrzej B.’s arms stash before he used it to such tragic effect. The fact is that he had the guns, and according to statistics from GunPolicy.org, which focuses on international firearm injury prevention, they might not have been that expensive either. Their estimated asking price for an AK-47 assault rifle on the black market in Poland is just over 1,300zł.

2 thoughts on “Gun Laws in Poland”