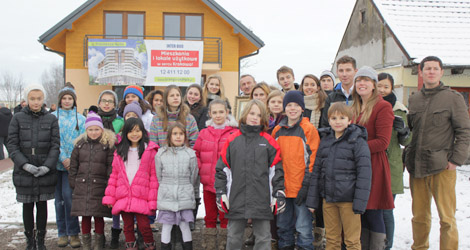 On August 21, 2011 a light aircraft plunged into the Nowa Huta home of Ryszard Nowak, a bricklayer with a family of twelve. The pilot and three passengers were killed in the crash, which also caused an electrical fire that engulfed the Nowaks’ house. All twelve members of the family were able to escape through a window.

Mr. Nowak was left without a home, and with a large family to support. To compound the tragedy, Mr. Nowak’s wife had died in a road traffic accident just a few months earlier. The local community was unable to give the Nowaks all the assistance they needed, though they made a valiant effort to do so.

Adam Zajdel, a physical education teacher at the International School of Krakow (ISK) heard the story on his car radio and decided to do something to help the Nowaks. “I thought to myself, this happened just 15 kilometres from my home. I put myself in Mr. Nowak’s position and that was my first strong motivation for doing something about it,” said Mr. Zajdel.

The ISK’s response to the Nowak tragedy was the Brick by Brick project. Its goal was to raise enough money, through fundraisers and school events, to purchase enough bricks for the reconstruction of the Nowaks’ house, a sum estimated at 4,000 złoty.

Mr. Zajdel and grade one teacher Susan Oswald oversaw the project, which took full advantage of ISK’s close-knit community. Ms. Oswald said: “It was really interesting to see the looks on the students’ faces when we showed them photos of Mr. Nowak’s burned house. And when they learned that his wife had died not long before… I think it really had an impact on them.”

The International School of Krakow is a small school with students from 30 countries offering an internationally based curriculum. Service learning, in which formal instruction is combined with related service in the community, is a big part of this curriculum, a requirement for graduation, and for the International Baccalaureate Diploma Program (IBDP) that is due to be introduced in August, 2013.

The ISK’s director, Mamie Heard, commented: “We strive to prepare our students to become global citizens by becoming actively engaged in the communities in which they live. This project gave students an opportunity to use what they learn in the classroom to solve real life problems with creative and collaborative solutions.”

The school’s fundraising events included ‘Risks by Teachers,’ in which students added coins to jars labelled with a teacher’s name and the ‘risk’ they had promised to take. The three risks that attracted the most money then had to be performed. One teacher promised to dress like Lady Gaga, another offered to allow students to throw cream pies at her. Friday Fun Nights were also organized, as well as bake sales and Read-a-thons. Students contributed to and participated in all of these events. 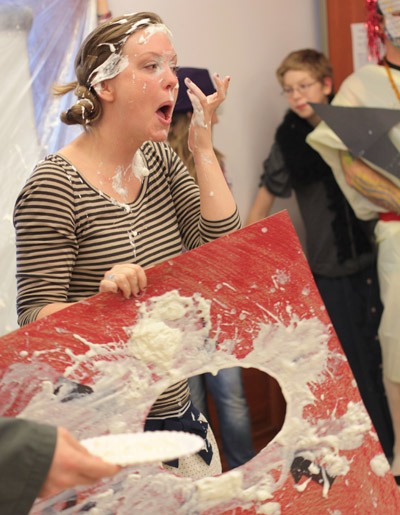 The Brick by Brick initiative was a great success. The school raised a grand total of 7,213 złoty, with surplus funds donated to the construction company rebuilding the Nowaks’ house. Mr. Nowak was presented with a symbolic brick during a ceremony held at the school.

When his new house was complete, Mr. Nowak graciously invited ISK students to the key-giving ceremony on December 4, 2012. All those who had contributed to the construction of the new home were invited, notably the owner of the construction company that worked on the project, members of the organization Tak, Kraków! that helped raise funds, and 24 students from the ISK. The students also had a guided tour of Mr. Nowak’s new 200 sq. m. house and received his personal thanks for their role in making it a reality.

Asha Klein-Bittenbender is a grade 10 student at the International School of Krakow.