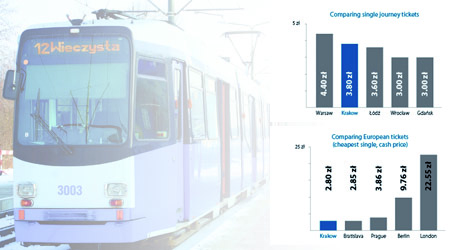 On January 1 2013, the prices of public transport tickets in Krakow increased for the third time in less than 18 months.

Tickets with the old face values are no longer valid on their own but, if you have been caught with some left in your wallet, you can purchase 10, 30 and 50 grosz supplements from ticket machines.

Until August 2011, a single journey ticket cost 2.50zł. The latest increase means this fare has increased by 52 percent in 16 months.

Double-digit price hikes are unlikely to be welcomed by Krakow’s commuters, but how do the new prices compare to those for public transport elsewhere in Poland?

Direct comparisons are not always possible, since different cities have slightly different ticketing systems, but the graph below compares the cheapest full-price tickets available in Krakow, Warsaw, Łódź, Wrocław and Gdańsk. 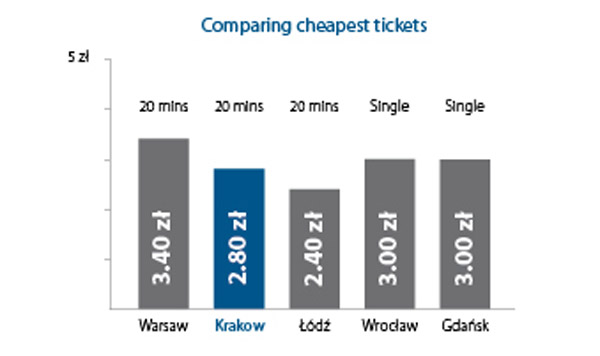 Krakow’s 20-minute ticket fare of 2.80zł compares well with Warsaw’s 3.40zł, but is beaten by a fare of just 2.40zł in Łódź. The cheapest tickets in Wrocław and Gdańsk are .20zł more expensive than Krakow’s, but have no time limit.

Comparing single journey fares, probably the most commonly purchased ticket, in the same five cities reveals Krakow’s to be the second-most expensive in Poland, after the capital (below). 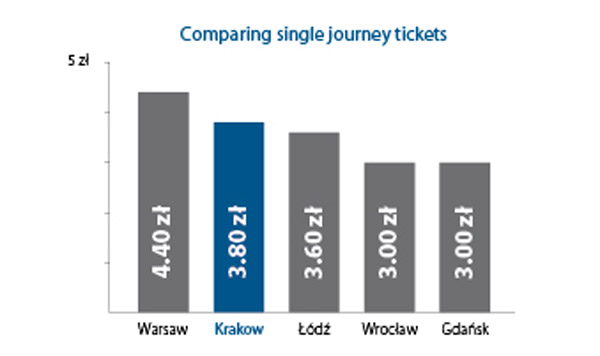 Looking further afield, Cracovians may be heartened to learn that they pay some of the lowest public transport fares in the EU. Basic, single fares in Bratislava and Prague are higher, and those in Berlin and London are many times greater (below).

London may remain a magnet for many young Cracovians, but they should be prepared to face basic, single journey fares on buses and the tube that are a stunning 700 percent higher than at home. 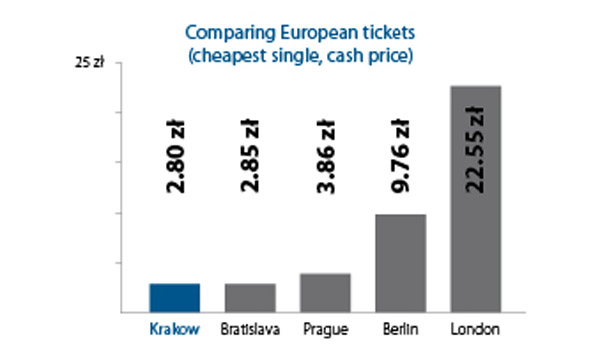 14 thoughts on “How Fair are Krakow’s Transport Ticket Prices?”