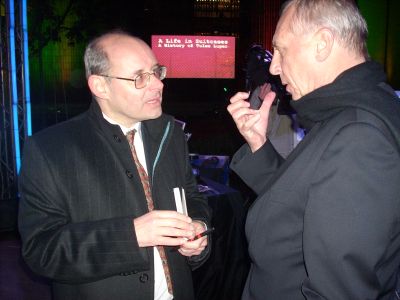 Renaissance painting has been a major influence in Greenaway’s cinematography, especially in composition and illumination. At last week’s world premiere in Krakow of his latest film, “Nightwatching,” Greenaway also showed a film that he said is what the new wave of cinema will be. The 50-minute film had no words. A disc jockey played music to the scenes.In addition to making movies, Greenaway paints and writes novels and other books.

The Krakow Post: “Nightwatching,” your latest film, strikes some people as visually simple compared with your other movies. Is there a reason for that?

Peter Greenaway: I am surprised by your question because “Nightwatching” is very complex. I also think it is very ambitious in its turn of lighting and its polemic and its emotional association. I also think curiously and — maybe this is strange for me — this is a very enjoyable film. A lot of people say “Greenaway cinema is not enjoyable.” And this one is.Did you understand its symmetry? Did you realize that the first seven shots are exactly as the last seven shots reversed? Do you understand that 46 shots in the middle of the film exactly mirror images of other shots? The film also touches on the notion of the coronation, the idea of babies, the notion of regeneration, the question of light. It is a very complex movie.

Q. What is behind your fascination with the Netherlands?

A.  From a very early age I wanted to be a painter. I was educated in the Arts School in London in the 1960s. You can’t think about Western painting without including Rembrandt, who was from the Netherlands.I don’t like Rembrandt that much, however. He had a very famous contemporary called Vermeer, and I think he is a much more exciting painter. But I don’t think you can afford to ignore Rembrandt because he is so important. He came at the beginning of modern painting. Rembrandt was living in Amsterdam in 1640-50, the time of the philosopher Descartes. Outside my house in Amsterdam there is a statue of Descartes. And if you remember, the feminist in my film said that “now women are allowed to insult the pope, to communicate with Descartes, to wear spectacles and breast-feed babies.”Dutch society at the time allowed females to have all these privileges. It is also true that females could read and write in the 17th Century in Holland but not in France, in England or Germany. Holland was very sophisticated in its pro-feminist attitude.I think female themes in this film are very important. Women – such as Rembrandt’s wife Saskie – are very powerful. They have something to say.

Holland has always been a very sophisticated country. Important subject matters since the Second World War have been abortion, homosexuality and euthanasia. The rest of the world, including you in Poland, have terrible problems with abortion, homosexuality and euthanasia. But not Holland. Another reason for my fascination with Holland was that my father was an ornithologist and was very interested in what are called pelagic birds – those that live in association with water,  like geese, ducks or penguins. My father, my little brother and I walked around Holland continually looking at birds. So for a long time I was interested in the geography and physicality of this country. And then, 12 years ago, I felt in love with a Dutch woman, and I gave up my life in England.  Now I live in central Amsterdam with a 6-year-old daughter — another good reason why I am associated with Holland.

Q. You have a controversial opinion that cinema is dead – in fact, it never even started. What do you mean?

A. I don’t think you have ever really seen a film. Everything you have seen is 112 years of illustrated text. The big things in the cinema that have happened in the last 10 years are “Lord of the Rings” and “Harry Potter.” These are films that illustrate books. When we are watching the film we can see the director following the text, illustrating the text. And in English “illustration” is a dirty word; it is rather like the difference between the conductor and the composer. The composer is far more valuable than the conductor, because the conductor only illustrates the music.I don’t want to be an illustrator; I want to be the prime creator. If you look at a text-based cinema, there is a way where the cinema can always be deconstructed back into something else.All of the six major arts are autonomous. They have their own languages and you can’t transfer them. But in the cinema you change everything you want. It didn’t create its language; it is a hybrid. It didn’t create its own vocabulary and now it is too late. It is dead.

Q. So why is cinema your life’s work?

A.  People are full of contradictions. But what I want to say also: I am in an extraordinarily privileged position, which you saw yesterday in Krakow at the premiere of “Nightwatching.” You saw two completely different phenomena. On the one hand, you saw “new cinema” — 3D and VJ presentation. On the other hand, you saw a classical film, “Nightwatching.”I am also allowed to make operas, to make DVDs, to do television, to write a lot. These are all different aspects of this big desire that we all have for enjoying what can be described as our “audio-visual sensation.”The Greeks have been doing it; the Romans, too. And opera was very successful for 300 years in satisfying our desire for big audio-visual phenomena. Opera died and the cinema came in. And now we have the same situation.Something is dying but it will be replaced by television phenomena which, in fact, is related to the digital age. I am a typical postmodernist, and postmodernists don’t cut themselves loose from the past but look back over their shoulders to see where they’re looking from.

Q.  There was a sentence “There is nothing like history” that you used to describe the new-cinema film you showed at the premiere of “Nightwatching.” But the film had no words in it – and telling the story is what film is all about. Will audiences accept the idea of films without narration?

A.  I understand your anxiety, but there is no such thing as narration in nature. Narration is a manmade phenomenon; it’s a way we have chosen to communicate. Since it is an artificial phenomenon, we can unmake it.Another point is that painting, a supreme visual art, is non-narrative. So why do we have to have a narrative cinema? I believe people who constantly feel they need a narrative are insecure and lazy. We have to reevaluate how we teach communication.You know, a huge revolution is going on now. Basically, we still have a text-based world, but now all of you, I am sure, have laptops. Derrida, the French philosopher, said “the image always has the last word.” The revolution involves society moving from text to image. And there is no necessity that we should bring text narrative to the image.

Q.  What do you think about Poland?

A. I know that we always use cliches but cliches are sometimes valuable because they help concentrate opinion. As far as Western Europe, I am sorry, you are basically invisible. We don’t know anything about you. You are a minor country in Eastern Europe?

Q.  Do you know any painters from Poland?

A.  No. There is one composer – Chopin – that we know. I am sure you have other composers but we don’t know them. They are not important European figures.Your contribution to Western Europe is very small. And you are also Roman Catholic, which is a terrible disadvantage. The greatest evil here is not a Soviet regime but the Roman Catholic Church.The church is violently anti-female, is deeply misogynist. It won’t even allow you to have control of your body. It denies you contraception; it denies you abortion. So you are backward compared with other countries. You have to join the modern world. We think of you as a minor, invisible, backward country on the edge of a sophisticated Europe.

Q. What are your future plans?

A. My next film, in Brazil, will be pornography. It will be connected with erotica in the Old Testament.And my second project is something else. Six months ago my daughter asked me: “Daddy, why did Jesus have two daddies (Joseph and God)?” So I have to write a script to answer the question.You remember the famous director Roman Polanski made the film “Rosemary’s Baby.” It involved the devil having sex with Rosemary to make a baby. My piece is that God had to have had sex with the Virgin Mary to make Christ. The church sticks with the Virgin Mary story — the notion of the virgin birth — so I want to explain to my daughter what really happened.

Q.  Are you going to make this film in Krakow?