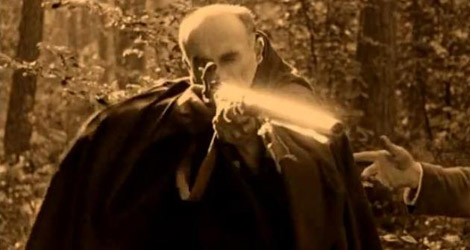 The list of Polish silent movies that survived World War II can be counted on the fingers of one hand. Ryszard Ordyński’s adaptation of Mickiewicz’s literary masterpiece Pan Tadeusz (1834) is among the few. Poland’s National Film Archive was able to meticulously reconstruct 120 minutes of the original, three-hour version. The movie was partially shot at the Karpowicz Manor in Belarus, close to Adam Mickiewicz’s home.

The plot of the epic poem narrates the rivalry between two noble families set against Napoleon’s invasion of Russia. The struggle for reconciliation between both parties parallels the Grande Armee’s advance through the Russian-occupied part of Poland. Andrzej Wajda was two years old when the original premiered in Warsaw in the presence of Marshall Józef Piłsudski.

Delightfully, both the original and the reconstruction open with an overview of Mickiewicz during his exile in Paris. Considered by Ordyński himself: “a sentimental journey through some situations from the book, rather than a mere illustration of the poem,” Pan Tadeusz astonishes with the wideness of its outdoor shots as well as the sumptuousness of its costumes. Furthermore, the choreography of the concluding polonaise is as well-orchestrated and refined as the acclaimed finale to Wajda’s 1999 film of the same title.