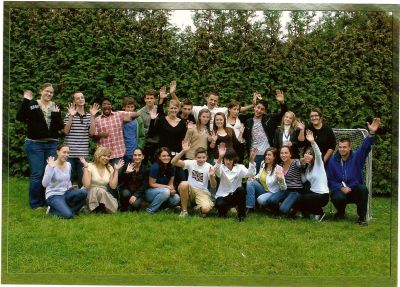 The school began in 1992 under the auspices of the General Consulate of the U.S., but has since become an independent entity. International School of Krakow (ISK), located in the Lusina and Mogilany districts south of Krakow, employs teachers from around the world, who teach in English.The curriculum ensures that children who attend the school can move to another place without difficulty. “This is a school for international students, so they have to be able to come from anywhere and go anywhere,” says Erica T. Mazzeo, the headmistress of the school.The school puts an emphasis on personal attention.

Classroom numbers are kept small, so that everybody can take an active part. Supplemental school activities help the students understand or repeat subjects if something is unclear. Students with special interests in certain subjects can continue their studies and discussions in afternoon topic clubs. Everything from the daily schedule to extra-school activities is arranged so that the best possible attention is paid to the social skills of young people. For example, if the fifth-graders’ topic is money, they are taught how it works in the real world by having their own intraschool currency called “dragons.” They use it to pay fines to the teacher for not being prepared, and they earn dragons for good grades.ISK admits children from 3 years old through 12th grade, which is roughly the age of 18. Being away from home all day is not a problem, because students have a lunch provided, along with medical care and door-to-door transport.

Native languages, including Polish, French, Dutch, Russian and German, are taught in ISK five times a week, so students keep close contact with their mother tongues. Other subjects are math, foreign languages, social studies, art, music, technology and physical education, plus extracurricular activities such as math and drama clubs. The school building, which sits at the center of a large, grassy campus, is a beautiful manor, refurbished to meet the needs of the school, with the basement including a science lab and the attic being adapted for an art studio. Each age group has its space, from children having their own wing, to the oldest students having a private break room. And ISK has ambitious plans for development, including expanding the library and gym spaces. Nevertheless, the stress is put not on physical facilities but on intellectual growth, ensuring that the school continues to guide the education and personal development of each individual student.

In a multicultural place such as ISK, there is frequently a question of coexistence of religions. “Fortunately, it is not an issue here,” said headmistress Mazzeo. “We teach respect and tolerance for others at every class, even PE. It’s incorporated into every lesson.” The popularity of ISK is indicated not only by the smiling faces of the students, but by the numbers as well: In 2004 this institution had 43 students. Now the number is 125, of whom 18 percent are Poles, even though the tuition (totaling 10,000 euro a year) is very high by Polish standards. The atmosphere in the school can be summed up by the words of one of the teachers, Paul Lucas, who instructs math and drama: “I always teach with full engagement. I can?’t stand it if somebody is prejudiced about my subject. I want everybody to enjoy math as I do.”