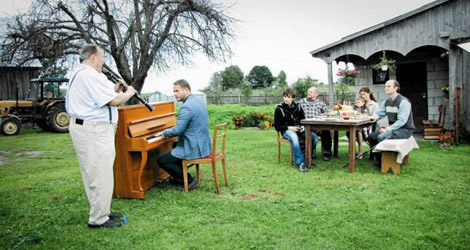 Better later than never for Michał Urbaniak, who made his acting debut at the age of 69 in Piotr Trzaskalski’s welcome return to filmmaking. The Polish jazz hero made a positive impression on moviegoers in the role of Włodzimierz ‘Włodek’ Starnawski, a retired clarinettist once invited to play with Benny ‘King of Swing’ Goodman. Almost impassive in front of the camera, Urbaniak underplayed his role with delicacy, reducing his range of facial expressions to the bare essentials. Mój rower (My Father’s Bike, 2012) deals with the masculine microcosm of three blood relatives scattered across Europe and obsessed with music. Włodek barely speaks to his son Paweł (Artur Żmijewski), a piano virtuoso based in Berlin. Paweł is also in a conflicted relationship with his boy, Krzysztof, (Krzysztof Chodorkowski) who lives with his mother in England. Women are deliberately left out of the frame in the screenplay co-penned by Wojciech Lepianka. The pre-existing empathy between Włodek and his grandson becomes the key to restoring healthier relationships in the family. Trzaskalski’s film suddenly transforms into a graceful road movie when the three men travel to Suwałki to bring Włodek’s wife back home. Mój rower is a welcome alternative to festival-targeted European movies often characterised by excessive dryness. Trzaskalski has cleverly managed to relieve the strain by putting the music in the right place at the right time. The inter-generational lake bathing scene is one of the most convincing in new Polish cinema.