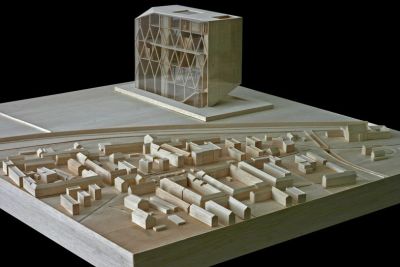 Magdalena Kownacka interviews Blak – who is notorious for manipulating his own biography, creating myths and appropriating situations, facts and stories – about his latest work “Conference on Erection of a Center for Muslim Culture in Krakow.”

The Krakow Post: What is the purpose of this conference?

Rahim Blak: Reflection on art is its main grounding, but there is more than one purpose. One of them – and the most obvious one – is an erection of a Center for Muslim Culture in Krakow. This is possible because art can provoke facts that are far away from their artistic source or field. It is also possible because in the art field you are free to do whatever you want. This time I decided to create something apart from the customary art field – but using its tools. Notice that the conference is preceded with an artistic manifesto, not a political or religious speech. The erection of this Center will be proof of the Causative Power of Art.

Q: You identify yourself as Albanian of Macedonian origins, as Muslim and lastly as an artist. On some other occasions you have declared that you do not want to be seen as a believer or a person favoring some religious or ethnic group. Are your origins and faith important for you as an artist?

A: Nowadays being a professed religious artist disqualifies you from contemporary artistic society. This society paradoxically is extremely closed and hermetic. Everything there – is closed in a circle with no reference to the outer world. With the Center project I left this magic circle, I started to exist in between and mix together these two hermetic spheres – artistic and religious. For the art world, the Center is a sculpture in public or rather social space, for Muslims it is a mosque. Art should fulfill needs and expectations of all these groups. But perversely, I declare my faith among artists and emphasize being an artist among Muslims. That provokes doubts. Lots of people, mostly from the artistic society, are asking me about my intentions. Are they right and honest? My Muslim origins especially provoke this question and make people cautious. For me this question is rather ridiculous. Are my intentions really so important for art? Do periods of fasting make me a good artist? No one will ever know if I use art for religion or contrarily I use religion for art. That makes the whole situation exciting and interesting.

Q: You claim that artists play the role of mediators, that they can provoke public debate on some important issues. What is the subject of the debate that you want to start and provoke?

A: I want to examine if it is possible for an artist to create some real situations, to be truly heard. I want to prove that he can play a vital role in society. To achieve that, I have to get rid of the distance that art imposes. With this distance, you just can not enter real life. That is why I became simultaneously an author and a character of this story. I initiate, observe and analyze the process for the realization of the Center and at the same time, I am engaged in creating a real foundation and a real architectonical project.

Q: Why do you want to prove the Causative Power of Art so badly?

A: When I was a small boy, I was living In Macedonia. I had an uncle there. His name was Mustafa. He had a long mustache and was a person of great respect for all my family. Once, when I was drawing something in my sketch-book, he snatched it out of my hands and said that I should stop doing these childish things and start to behave like a man – dealing with things of great importance. I really would like to show uncle Mustafa that art can be meaningful – that art can be important.

Q:  Does it mean that you expect art to be functional and serviceable?  Is it a kind of reaction against its inaccessibility?

A: People often consider art as something distant to reality, something that refers to this reality with irony, something which in fact is not real. On the other hand, artistic society expects that an artist, especially a young one, will constantly justify himself and his action. In my last works, I proclaimed that I was taking money for services. The art world accused me, because of that, of acting maliciously. This was a great hypocrisy, because everyone would like to be paid for what they are doing. In art money is a taboo. After this experience I realized that what is interesting for me in art is creating some doubtful situations. Art does not believe itself. And the art society frightfully wants to avoid all kinds of hustlers. And because of that fear art chases its own tail and guards itself against truly new ideas. That is why I found trying to fit myself into this society useless and art itself stopped satisfying me. I started to explore some other fields. I orientated myself towards Muslim society. I can use my status as an artist to do things – that for them – are just futile wishes. I can erect a mosque in Krakow. I discovered that people who are apart from the art world truly believe in art and its power. It is a completely different image than the one you come across inside the art world. The Center for Muslim Culture in Krakow would measure the executive power of art

Q:  You are known as an artist who appropriates existing situations and facts. Now you want to create something from its base. Is it a significant change in your methods or just an evolution of them?

A: No, the method has not changed. I define my works as “ready mades.” What I understand by this attribute is an increase in the ways of reception, rather than just using already existing objects. With The Center for Muslim Culture in Krakow it is exactly as with the famous urinal of Duchamp. An object keeps all of its features but becomes polysemantic. This time instead of an object or situation I am using some existing formulas, procedures and mechanisms, but the idea and result are the same.

Q:  Do you expect some specific kind of reaction to the idea of building a mosque in Krakow from the citizens of the city?

A: Everyone always suspects me of being a scandalous artist. But in my opinion, scandals are something easy to predict and in fact not interesting. I have an opportunity to influence the image of the city and to change its social reality. I define this activity as “Painting in Social Space.” I am changing the image of art and artist and at the same time I can create a positive reception for Muslim culture. It is much more interesting than just being provocative and scandalous.
Conference on Erection of Center for Muslim Culture in KrakowAuditorium Maximum UJ ul. Krupnicza 33October 24, 18.00