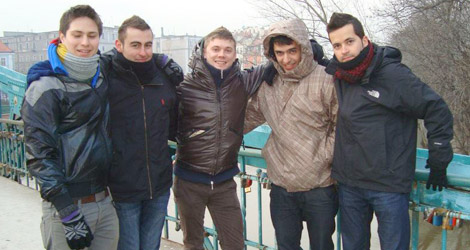 The large number of international companies operating from Krakow, together with the economic crisis in Southern Europe, have led to an increasing number of young Spaniards, Portuguese and Italians seeking a decent living and a prosperous future in Krakow.

Alejandro Molina, a 30-year-old graduate from Andalusia, is a good example. He moved to Krakow in October, 2010 because he could see the economic situation in Spain worsening and he had a Polish friend here. He left everything behind to start a new life in Poland. After distributing hundreds of CVs, he eventually found a job as an IT analyst. Alejandro says his experience of living in Krakow has freed him of a certain “cultural arrogance or sense of superiority” that he believes many southern Europeans bring with them to Poland.

Javier Crego, a 27-year old from Madrid, is a colleague of Alejandro’s and spent a few months in Gliwice as an Erasmus student in 2010 and 2011. Failing to find a job in Spain after graduating in computer sciences, Javier looked in Gdańsk, Wrocław, Poznań and Warsaw before trying his luck in Krakow, and finding a position as an IT analyst in October last year. “It was in Krakow that I found a company willing to give me a chance,” he says. With Spain’s unemployment rate now above 26 percent, it is not surprising Javier was unable to find his first job in his homeland.

Many young Spaniards living in Krakow, and Poles who want to improve their Spanish language skills, gather every Thursday evening for Café Madrid – a language exchange event that takes place at the Por Fiesta Club (ul. Warszawska 17). Magdalena Dudzik, the event’s organizer since its inception in September 2010, explains that Café Madrid helps Spaniards learn useful information about what to do and see in the city, as well as giving them an insight into Polish culture, cinema and music.

Krzysztof Kisielewski is a Pole who attends Café Madrid regularly. “The first time I came to the meeting, I could barely say ‘hello’ or ‘goodbye’ in Spanish, but everyone made me feel very welcome.” Krzysztof has successfully used Café Madrid to complement his study of Spanish and is now fluent in the language, in addition to having met some new and interesting people.

Magda Dudzik has observed that Spaniards are usually very bound to their homeland and that: “those who have moved to Poland are very brave, open-minded and eager to face big challenges, like the Polish language. They are very interesting people to talk to.” In her opinion, most Spaniards in Krakow are making an effort to integrate into Polish society, though the language barrier makes this quite difficult.

Magda has also noticed that the number of Spaniards attending the meetings has increased significantly in recent months, likely indicating a growing number of young Spanish expats arriving in the city. “When I am at Dworzec Główny in the mornings, I overhear more people speaking Spanish than English,” she says. The Por Fiesta Club’s manager, Amelia Huszcza, says numerous Spaniards have asked her to help them find a job in Krakow recently.

Italy, like Spain, is also suffering under the economic crisis and has sent many young professionals to Krakow in recent years. Among them is 28-year old Alan Mancinotti, from L’Aquila. He was the marketing manager for a Visa credit card partner in Milan at the beginning of 2011 when the company decided to shut their offices in Italy. He searched for a job in Italy for a couple of months before deciding to move to Krakow, mainly because he had visited the city a few years earlier and loved its atmosphere.

Now, Alan is working for an IT corporation at the Krakow Business Park, but his dream is to start his own business. He believes Poland is: “Full of opportunities and has huge potential. The local currency and work regulations are attracting many foreign investors, and this is going to have a positive impact on the life of Polish people,” he says.

Alan used to attend a weekly English-language meeting, but met a Polish girl there who was studying Italian and, together, they decided to organize meetings for Italian speakers in Krakow. It started as an educational, language group but, in less than a year, their Facebook page has more than 600 users and their meetings have become much more than just a place to improve your Italian. “Now we are a big group of friends and we often organize Italian dinners, play games, watch Italian movies, or just meet for a beer.” During the winter months, the Italian meeting takes place every Monday at 18:30 in Movida Cocktail Bar (ul. Mikolajska 9). 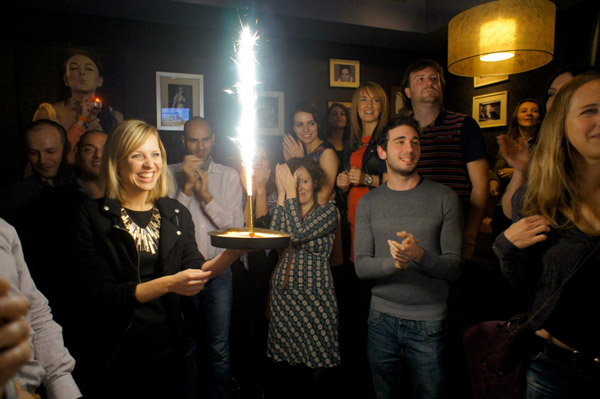 Alan is convinced that the biggest challenge for most Italians living in Krakow is the weather. “I’m from one of the coldest cities in Italy, L’Aquila, but the cold here in Krakow is terribly wet. Try to imagine that a lot of us come from regions like Sicily, where people are used to going to the beach until the end of October,” he says. “Another big challenge for us is the Polish language.” Food is also a big deal for the Italian community: “We really like a lot of Polish specialties but, for us, it is impossible to live without Italian food. Whenever one of us discovers as small shop where it is possible to buy true Italian olive oil or cheese, we tell everyone at our Italian group meetings!”

Salaries are generally lower in Poland than in most of Southern Europe, but so is the cost of living. In Krakow, these young professionals can at least can gain professional experience, start along a career path and enjoy a better quality of life than if they stayed in their home countries.

It is difficult to estimate how many Spaniards, Italians or Portuguese have moved to Krakow or how many live in the city because many are not yet registered in their countries’ embassy or even with the Polish authorities. However, there are groups and pages on Facebook for Italian, Spanish and Portuguese expats in Krakow with hundreds of members (Cracovia en Español has over 1,000 friends, for example). During the Euro2012 tournament last summer, dozens of Italian and Spanish fans gathered to watch their national teams’ matches in the Błonia and Galeria Krakowska fan zones.

These new Cracovians from southern Europe have their own, individual stories, but what they all share is ambition, enthusiasm about Krakow and the conviction that they are not going back to their homelands anytime soon.

30 thoughts on “Southern Europeans Seeking a Better Life in Poland”