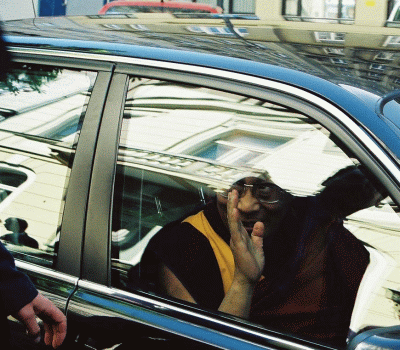 The Dean of Philosophy Prof. Maria Flis and the Vice Dean Prof. Marta Kudelska of the Jagiellonian University, both stress the importance of the nomination. “The honorary degree granted to the Dalai Lama is in line with previous recipients such as Mother Teresa (1993) and John Paul II (1983)” points out Prof. Kudelska.The 14th Dalai Lama, Tenzin Gyatso, represents “morals and values that if practiced by all of us for at least five minutes per day, would make the world a better place” smiles Prof. Kudelska. Not hiding the fact that the honorary title of the Dalai Lama will raise the prestige of the university, both professors claim a need for it.

There is a strong interest “from not only students but also from the Polish society in learning about other cultures, especially Buddhism,” adds Prof. Flis. “Even though there is a generally propagated opinion that Poles are xenophobic and narrow minded, it is not so,” stresses Prof. Kudelska. “The young generation of students are very open to other cultures and have a hunger for knowledge about other religions and societies. Here at the university anthropological electives and Asian studies are hugely popular, continually growing in demand,” adds Prof. Flis, “and this indeed is a good indicator how open Poles are becoming.” Prof. Kudelska adds that “we also need to counteract against the eurocentrism that still prevails in Poland.”

Awareness of other cultures is necessary if a society is to develop. There are estimated to be several thousand practicing Buddhists in Poland. Since the collapse of the Eastern Bloc, the religion has been able to develop further. With the influx of Chinese and Vietnamese migrants, the Buddhist faith is spreading across Poland. The Buddhist Union of Poland and the Buddhist Mission congregate over 20 Buddhist groups in Poland.The nomination procedure for the honoris causa lasted nearly two years. Prof. Flis explains that the whole process is very stringent and goes through various committee levels for approval. First some 15 professors signed a motion nominating the Dalai Lama for an honorary degree, which was then passed onto the Honors Assembly.

With the assembly’s approval, the motion was then taken up by the University Senate. The senate analyzed, reviewed and then approved the application. Then a secret ballot was held to vote for or against Tenzin Gyatso entering the honors roll. Sixty-one votes were for the nomination, one against and two abstained from voting. “Only the ceremonial aspect is left,” points out Prof. Flis. The university is hopeful the Dalai Lama will accept the invitation and come to Krakow for the honoris causa ceremony. “If His Holiness did come, the ceremony would be held at the Collegium Maius and the Dalai Lama would be presented with the honorary degree, which would be read out at the ceremony in Latin,” she adds. The Collegium Maius is the oldest Jagiellonian University building, dating back to the 1400s. The honored guest would then give a short lecture, followed by refreshments.

In the event that the Dalai Lama does not attend, Prof. Flis smiles and assures of a plan B. “If the Dalai Lama cannot attend, we will take the honorary degree to him.” The university’s chancellor, the dean of philosophy and the vice dean and another academic, who have authorized the granting of the honoris causa, would fly to India to present the Dalai Lama with the honorary degree.  “But we are optimistic that His Holiness will want to come and receive the honor here at the university himself,” adds Prof. Kudelska.

Once the nomination was made public, the university received some slight pressure from Chinese authorities to re-think their nominee. Prof. Kudelska stresses the signs were “delicate” instead of forceful and “we were asked whether electing the Dalai Lama for the honorary degree really was worth all the trouble.” But it went no further and the Senate continued with the process, a sign from the university that “this is a place where politics are studied and not entered into,” Prof. Kudelska smiles. Professor Flis further stresses that granting the Dalai Lama the honorary degree is necessary “to show Polish society that there are great people out there who fight for the greater good in a way that is not viewed in a negative fashion,” using the “satyagraha philosophy as propagated by Ghandi through the practice of non violent resistance” she concludes.

But there is no further talk of official support for Tibet. “The university elected the Dalai Lama because of his spiritual leadership status,” Prof. Kudelska adds.  Other honoris causa degrees have been granted to the English historian Norman Davies in 2003, to Maria Sklodowska-Curie in 1924, to the Nobel Prize winner in Literature Czeslaw Milosz in 1989, and the controversial Giulio Andreotti in 1992, the Italian prime minister who in 1993 was accused of mafia-related dealings.