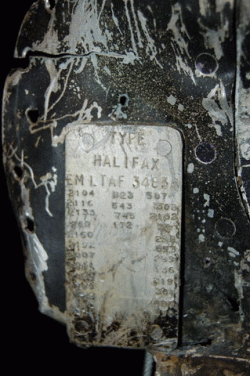 The burial ceremony was attended by Royal Air Force, Canadian and Polish army representatives as well as the Canadian ambassador to Poland, David Preston, British Charge d’Affaires Patrick Davies and family members.The plane with five Canadian and two British soldiers on board was shot down by a German fighter while dropping supplies to Polish insurgents fighting in the Warsaw Uprising. The Halifax, commanded by Canadian Capt. Arnold Raymond Blynn, took off on August 4, 1944, from the base of British 148 Squadron in Brindisi, Italy. The plane didn’t make it to its destination point, the city of Skierniewice near Lodz.A few human remains from the crash were found and buried in a cemetery in Dabrowa Tarnowska and after the war reburied in Krakow.

The wreckage remained buried along with most of the remains for more than 60 years.The hull of the aircraft was discovered in November 2006 by historians from the Museum of the Warsaw Uprising and then recovered. Family members of the airmen decided to bury them in a single grave in Krakow.In addition to Capt. Blynn, Harold Leonard Brown, George Alfred Chapman, Arthur George William Liddell, Charles Burton Wylie, Kenneth James Ashmore and Frederick George Wenham lost their lives in the crash.

After the funeral, the relatives visited Dabrowa Tarnowska where a memorial to the airmen was set up in September. In Warsaw the relatives visited an exhibition of the Museum of the Warsaw Uprising, where the JP 276, a wreckage and personal items of the crew are displayed.The Warsaw Uprising against the Nazi German occupation began on September 1, 1944, and was intended to last for only a few days until the Soviet Army reached Warsaw.

However, Soviet dictator Josef Stalin deliberately stopped his troops and let the German army crush the insurgents.During the 63-day uprising, an estimated 15,000 members of the underground Home Army and 200,000 civilians were killed. The city was left in ruins and its surviving inhabitants were expelled. The air drops organized by the RAF had little effect as the British planes had no permission to use Soviet airports.

Due to the long distance from bases in Italy and Britain, the volume of supplies was reduced and casualty numbers were high. Twelve percent of the 296 planes that took part in this operation were lost.