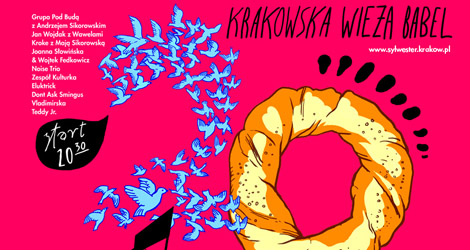 Let me start by making it clear that I have no beef with R&B singer Kelis (of ‘Milkshake’ and ‘Popular Thug’ fame). She’s not my favourite, but I have no problem with her. I will say, however, that I was flabbergasted to find that she played Krakow’s New Year’s Eve concert just two years ago.

Other than the nicely alliterative title one could brainstorm (‘Kelis: Concert in Krakow,’etc.), I struggle to fish up any sort of reasoning to legitimise her Sylwester appearance. Why Kelis? Why Kelis and Krakow? What’s the connection? I was stumped, and slightly amused.

That was two years ago. The world has changed; Krakow has changed (for example, we now have Nicki Minaj). Krakow’s 2013 New Year’s Eve celebrations promise to be different. Instead of looking and reaching out to cultures and climes further afield, the city has looked into itself, and into a unique musical culture that has always existed here. That’s quite a refreshing notion in 2013.

One thing that has changed is that there will actually be a New Year’s concert this year. Bureaucratic quandaries, intensified by the city’s fiscal crisis, made for a complete no-show in 2012. There were no big names on stage in the Rynek, just a couple of small DJ sets.

Old traditions die hard, though, and some 18,000 people crowded the square anyway to set off fireworks, drink vodka, and dance. Perhaps this was the turning point for city authorities: people will show regardless, either with Kelis or without her.

Weltschek and his colleague Jacek Stankiewicz recalled a 2006 performance of Chase’s band Eluktrick, and asked him to compile a list of local Polish and expat bands. The programme concept was epic: the city would organise four stages around the city, in Podgórze, Kazimierz, Stare Miasto, and Nowa Huta, each with their own type of music.

The four stages would represent four different ‘cities,’ – a microcosm of Krakow. Cracovians would be encouraged to hop around the city, sampling music from each stage. Chase gave Teatr Groteska a list of 15 bands (later whittled down to ten), and the wheels began to turn. “Then,” Chase laments, “the wire went silent.”

Everything was to be signed and ready by the end of June 2012, but no one heard anything until mid-July. Krakow found itself in the midst of another budget funk and the city scaled back the number of bands to five, and razed all but one of the ‘cities,’ – Stare Miasto would be the one and only stage.

The green light for New Year’s Eve 2013 finally came in late September, after five more bands had been added to the bill. In total, ten bands are slated to play — five Polish, five expat. The event is being branded as Krakow’s Tower of Babel (Krakowska Wieża Babel), which, according to Krakowskie Biuro Festiwalowe (KBF), symbolises: “history… tradition… tolerance and hospitality.”

The bands only got final confirmation in early December, eight months after initial contact and perilously close to the finish line. Perhaps the delay can be attributed to the difficulty of getting three very different organisations, the KBF, the city and Teatr Groteska, working in synch.

In fact, the city has made a brave and significant step by embracing its very eclectic and prolific artistic community – the 2013 Sylwester programme is proof of that. Krakow needn’t look far outside the Planty for quality musical talent and has made a bold, if hesitant, move by embracing its own.

Cracovians will be in the Rynek on December 31, whatever has been planned. The morning after will reveal if the Tower of Babel stood or fell.

3 thoughts on “A New, New Year’s Eve for Krakow”