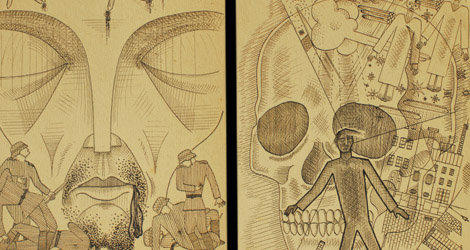 Ryszard Apte was 16 at the start of World War II. A native of Krakow, he was the son of one of the city’s tens of thousands of assimilated Jewish families.

Living on ul. św. Sebastian, he had attended the Hebrew Gymnasium on ul. Podbrzezie. He wrote, he drew and he played musical instruments. In 1942 he was deported by the Nazis to a work camp in Stalowa Wola, where he died, aged 19.

It’s the story of hundreds of thousands of young Jewish men who lost their lives in the Holocaust. What makes Ryszard Apte’s story different, is that he left something behind – a collection of illustrations he created while languishing in the Wieliczka ghetto, a collection he titled ‘Anxiety.’

Regardless of their artistic merit, Apte’s drawings are immensely valuable cultural objects, representing one of the very few surviving examples of visual art created by an individual living at the time and under the direct threat of the Holocaust.

Apte’s illustrations were rediscovered in 2009 in a house in Wieliczka. They take up several pages of a simple school notebook, its green cover
inscribed in the artist’s own, schoolboy hand: “Ryszard Apte. 1939/40.”

The Ryszard Apte: Anxiety exhibition that opened at the Galicia Jewish Museum on November 15 is the first time Apte’s work has been on public display. 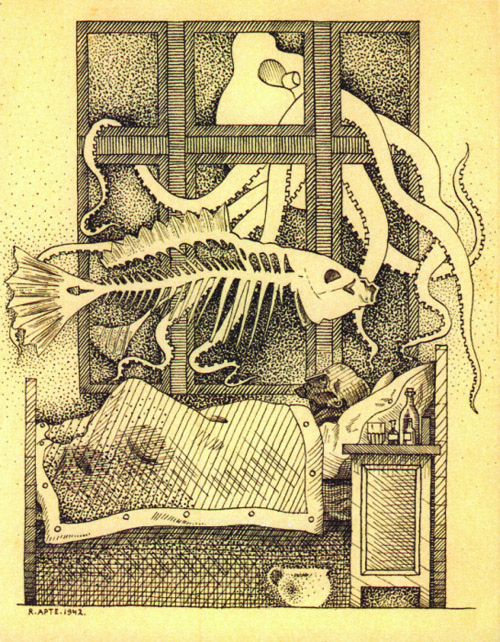 The style of the illustrations is cool, composed and rational – their content is anything but. The lines and cross-hatching are meticulous and have an undeniable naivety, but the figures they delineate are not the fantasies of youth. In the mirror of a coolly rendered barber’s shop, a half- starved figure has his head shaved by a giant, faceless skeleton. A tentacled horror and a fish picked clean of flesh hang over a figure tucked up in a comfortable, middle-class bedroom.

Polish art historian and critic Anda Rottenberg has described Apte’s illustrations as a “sensational discovery that puts the viewer in a position of utter helplessness.” Visitors to the Galicia Jewish Museum are invited to confront this powerful testimony from the past.