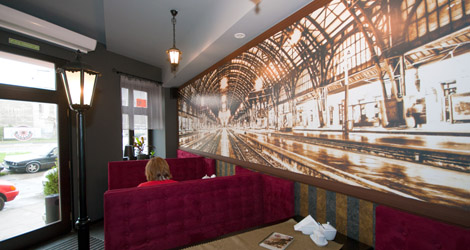 Galicia is the historical name for a region of what used to be eastern Austro-Hungary, stretching from present-day Małopolska east to Lwow in Ukraine and beyond, and south to what is now northern Romania.

Galicja po Kolei is a new restaurant, just off Plac Bohaterów Ghetta in Podgórze, that attempts to bring together the varied but related cuisines of these regions with some Czech and Slovakian thrown in for good measure.

Unassuming from the outside, the interior is compact and cosy. Decorated with black and white shots of steam trains, and with one wall entirely given over to a wide-angle interior shot of Budapest central station, customers are transported to somewhere in central Europe.

The name is a play on words – literally: ‘Galicia by railway,’ but figuratively ‘Galicia day-by-day.’ The twist is that, depending on which day you come, you will be offered a different menu – Ukrainian on Monday, Hungarian on Tuesday, Czech on Wednesday, and so on. There is also a daily lunch menu (30% cheaper) and other staples such as pierogi, salads, potato pancakes and pork or chicken dishes that are always available. Mains range from 15 to 30zł if you go in the evening – extremely reasonable.

I arrived on a Wednesday evening, which is Czech day, and was served garlic soup to start, following a generic aperitif – grzaniec (mulled wine) – that was spicy and warming. My soup was creamy and garlicky, with crunchy croutons to go with it. On a previous visit, I had sampled the Hungarian fish soup, which was also hot and hearty.

A second starter arrived – fried cheese in bread crumbs with fries – a dish I have had on numerous visits to Czech and don’t normally like due to excessive grease, but this was crisp and delicious, and served with a tangy garlic sauce. Next came a Romanian dish, trout with almonds on polenta with a creamy leek sauce. Polenta, a starchy, corn- based staple, is not normally very tasty, but this was fine, and complemented the tasty baked fish well, as did the sauce.

My partner had the pork loin stuffed with prunes and apricots was surprisingly moist and tasty, and served up with a plate of appetising grilled vegetables and potato wedges. Also worthy of mention from a previous visit is a turkey dish in saffron sauce, both delicate and satisfying, with succulent meat.

The professionally trained chef clearly knows his stuff, and what this restaurant does so well is combine quality, quantity and good value: a rare feat. Combined with excellent, friendly service, this restaurant definitely appears to be on the right track.

The wine list could be accused of being slightly perfunctory, including only a few Hungarian, Romanian and (ahem) Ukrainian vintages, as could the beer list, which features just Żywiec, but these were my only quibbles. Anyway, the list of shorts, shots and other alcoholic beverages makes up for this.

My dessert found me, as ever, with a pretty full stomach, but the frozen tort with white chocolate, walnuts and raspberry sauce, was just the ticket and went down smoothly. A Viennese coffee to finish – the rich coffee came laced with honey and whipped cream – rounding off the meal and leaving me a very satisfied customer. Podgórze, otherwise a bit of a culinary dead-end, has a new best restaurant. Time to stop off and inspect it.

One thought on “Drop In: Galicja po Kolei”