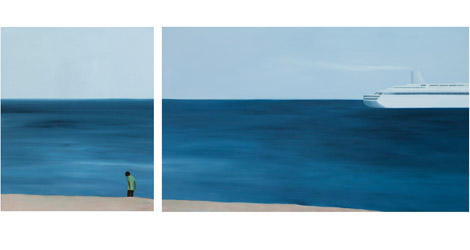 Aleksandra Batura opens the door with a warm, expansive smile. She holds her blond toddler, wriggling in her arms. Later it strikes me he is dressed in a white sweater with blue stripes, and blue trousers.

Blueness – this is the initial impression when viewing Aleksandra’s work on her website (www.aleksandrabatura.com) – blue seas, blue skies and the occasional, isolated human figure set against them. An unreal realism. Calm, yes, but I ask if there is also loneliness in this clean and meditative stillness. “Yes, but loneliness can be good or bad,” she replies, “internally I need a lot of space, maybe this is why they are blue.” 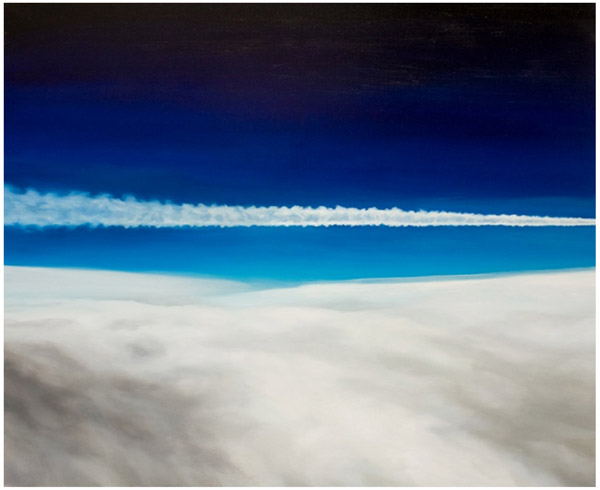 In the Distance – Aleksandra Batura

We enter the studio of her 4th floor apartment on romantically ramshackle ul. Bonerowska, skirting the Planty. Canvases are stacked ten deep facing the walls, the heady scent of oil paint rises from them. Aleksandra exudes an enthusiasm that is also heady. She pulls out canvases, and shows me three or four unfinished pieces exploring animal vision, including the one on her easel of blue tending to green.

Aleksandra has been a Krakow artist for eight years now, having relocated from her native Mazury – Poland’s lakeland of skies and space. She started her art studies in Gdańsk: “The seaside is the subconscious,” she tells me, “blue is freedom, and the sea is like a dream.” But she misses the coastal city: “I cried for two years after moving here.” 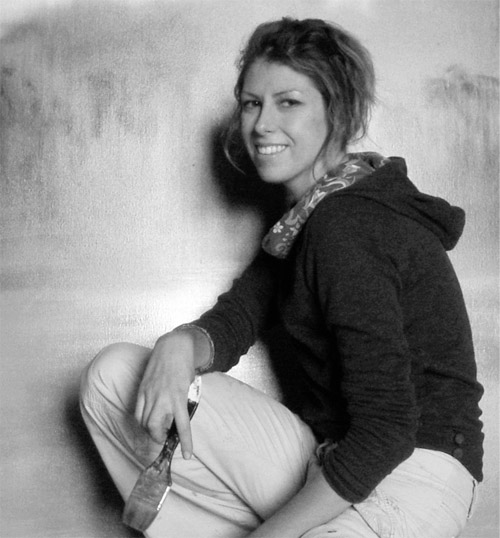 Aleksandra Batura in her studio

I ask if the sky-reflecting water is like a membrane between two worlds: “I like jumping from one reality to a different reality, and it’s very important to show the special moment beyond reality, something extraordinary,” she says.

Extended working stays in Rome (“Rome is a very green city”) and Malaysia, seem to have been formative – nature and animals; monkeys, anteaters, wild pigs, ghost dogs and the cannibalistic Mexican axolotl seem to have crept into her work as a consequence of the latter.

Aleksandra thinks of herself as an outsider, despite sharing Krakow with a number of somewhat insular artistic groups, and attending Krakow’s prestigious Academy of Fine Arts: “I don’t care so much about artistic communities.” She pulls out more canvases. Now we’ve spilled out of the cramped studio, into the bedroom, surrounded by paintings, and into her son’s playroom. “Special artists make art just for themselves, and communicate, because art is a kind of language.”

Her earlier work shows a preoccupation with technology, transport and industry. Stark lines intersect, again realistic, but not harsh, rendered with the kind of soft precision of an Edward Hopper, or a Georgia O’Keefe.

Then out comes the blue, her own ‘blue period.’ There is something unavoidably reminiscent of 1960s Hockney about the draughtsmanship and the faultless azure, humans both swallowed up and alienated by it. And then green seeps in, becomes predominant, her oeuvre journeying towards nature and her current project: the vision of animals. As we talk, her son grasps for the dictaphone – I have to keep switching hands. Perhaps he has inherited his mother’s inquisitiveness, her need to keep moving and explore.

“I’m too young to do only one thing, like a robot,” she says. Indeed, she is versatile, a rare, wide-eyed and ever-curious artist, using multiple themes and media. “Art does not like a frame,” she says, “Consequence is not as important as looking for something.”