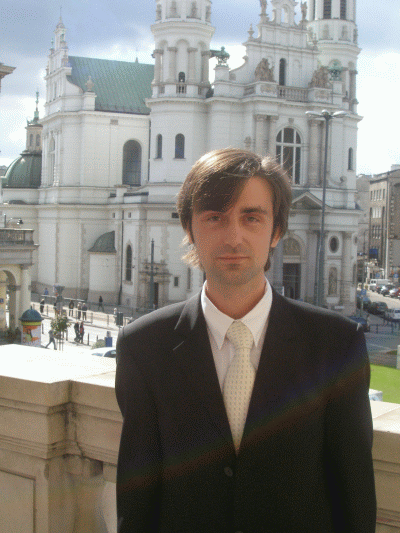 Voters in Poland will have a unique opportunity to vote for an openly gay candidate in upcoming elections on October 21, after Szymon Niemiec, the founder of Gay Pride in Poland, was officially placed on the list of two minor Polish political parties, the Union of the Left and the Polish Labor Party.

Niemiec, the author of “A Rainbow Colored Hummingbird on My Butt: Poland’s Gay Suffrage” published earlier this year, and, controversially, a minister of the Free Reformed Church of Poland, has been selected by the parties to represent Warsaw’s District 2. The Polish Labor Party, created by labor unions representing coal miners unions, nurses and teachers, and the Union of the Left, created by minorities which bolted from other mainstream left-wing parties in 2005, have a common platform that opposes discrimination; advocates domestic partnership for homosexuals; favors universal health insurance; demands the separation of church and state; and, regarding foreign policy opposes Polish troops in Iraq and Afghanistan and is against the U.S. anti-missile shield being based in Poland.

The selection of Niemiec comes at a time when homosexuality is in the news in Poland with the PiS government trying to fire homosexual teachers and official outrage at the Tinky Winky character in the children’s television show “Teletubbies.”Speculation about the sexuality of the Prime Minister Jaroslaw Kaczynski has long been a hot topic in Poland and last October, on TVN’s “Teraz My” (“Now Us”) program, former President Lech Walesa confirmed to anchors Tomasz Sekielski and Andrzej Morozowski what he said more than 10 years before when he was interviewed live on TVP, the state television channel and discussing a birthday party he held while in office. When asked who came, President Walesa said that he invited Lech Kaczynski and his wife and Jaroslaw Kaczynski and his husband. Neither one of the twins attended.

This followed revelations last fall in Gazeta Wyborcza and Rzeczpospolita that the Polish Secret Service had in 1992 undertaken an investigation to find out the identity of Jaroslaw Kaczynski’s significant other, and if the relationship was stable. The Secret Service in the Communist regime also investigated Jaroslaw Kaczynski and papers published in the Polish press say that he was not interested in meeting women, per se. When Walesa made his original comments on television a decade ago Jaroslaw Kaczynski said he wanted to sue but because Walesa was the head of state at the time, he was immune from such action. When Walesa repeated the allegations in October 2006, when he was out of office and no longer immune, there was no reaction from Jaroslaw Kaczynski. Niemiec is not the only gay person seeking election, or re-election, but he is the only openly gay person on the ballot this month. During the last election, Robert Biedron, head of Campaign Against Homophobia (KPH) stood for office as an openly gay man after being nominated by leading left-wing party LiD, a left-wing post-Communist coalition of the SLD and SDPL parties.For reasons that are unclear, Biedron has chosen not to run this time.

Attempts to reach him by phone and email for comment were unsuccessful. Niemiec says that gays and lesbians have been abandoned by the mainstream left wing parties. In 2001, the SLD (Left Democratic Alliance) promised legal domestic partnership for gay people but this item was removed from its platform in the run-up to this year’s election, apparently to make the coalition more attractive to mainstream voters.

“The LiD coalition, which includes the SLD, has removed all human rights references from their platform, purged all openly gay members from their lists of candidates, and has invited well-known homophobes to be the public face of their coalition in a shameless effort to court the homophobic, anti-human rights vote,” Niemiec said. “This amounts to a great betrayal of homosexuals in Poland, who supported SLD and other members of the coalition for so long.

“Niemiec, says he knows some closeted members of Kaczynski’s PiS party, and does not believe in American-style “outing” of anti-gay politicans who secretly have gay relationships because “even public people have a right to privacy.”Outing is the practice of revealing the secret gay life of anti-gay politicians in America. However, Niemiec said that the easiest way to find “pink dirty stories” involving anti-gay politicians and clergy who sleep with men is to check with homosexual escort agencies in Warsaw.