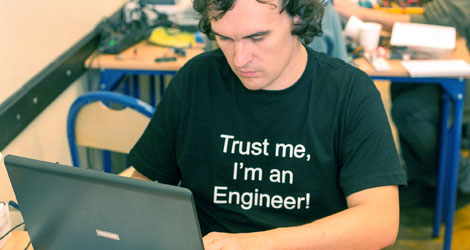 A space for hackers in Krakow? A den of cyber-bandits intent on stealing my Facebook profile? No thanks!

Have no fear, the bad guys are called crackers – hackers are something else. Hackers are interested in understanding how the world works. You could call them tinkerers or inventors. Hackers prefer to make things, or adjust what they already have, rather than buy new. And they are everywhere. If you want to meet one, the IT and electronics industries are their natural habitat.

In order to thrive, a hacker needs tools, space and other hackers who possess knowledge he or she doesn’t yet have. A basement computer centre won’t do in the long run. This is why Krakow’s hackers are joining forces to set up a hackerspace in the city.

A hackerspace is a place where programmers, DIY enthusiasts and artists can meet, start projects, learn, teach, spread IT lore and try to make the world a better place. It’s an open space equipped with specialised tools and free knowledge. There is even silence if you need it.
There are hundreds of hackerspaces across the globe, and at least three in Poland. It’s high time Krakow had its own – Hackerspace Krakow (HSKRK).

A Hacker’s Guide to Improvement…
Hackers make robots. Hackers weld. They write and test new computer programs. They even knit. They do some things for fun, or just because they can, but they can also help with serious problems if needed.

A hackerspace can, for example, assist the municipal authorities to address air pollution problems by devising clever sensor systems. They can teach kids how to fix their broken toys or advise you on which laptop to buy. The possibilities are endless. Think of Hackerspace Krakow as a low-key think tank.

The Red Tape…
Hackerspaces come in various flavours: some are informal gatherings, other are clubs, societies or foundations. Hackerspace Krakow has opted for the latter option. It will support its existence through donations from sponsors and membership fees. If you can’t afford the fee, that won’t be a problem. Members are encouraged to contribute in any way they can.

As for the bigger players, Lunar Logic Polska has supported the initiative from the very beginning, providing funds, gear, space and people. Krakow’s Google Developer Group has also helped, supplying hearts for the robots and the time of their ultra-pro members.

In charge of organisational and official matters at HSKRK are Maria Skrzypek and Mirek Woźniak. There are also other, core members who perform duties assigned by the founders or devise tasks for themselves (90% of the time, it’s the latter). Finally, there is a constantly churning mix of dozens of people who attend events, help with various chores or just keep the idea alive.

Status Report…?
Hackerspace Kraków is almost ready. The foundation has rented a flat at ul. Radziwiłłowska 20/2 (five minutes from the Main Square). Right now, the space is completely raw, lacking such rudimentary features as a heating system or a stable electricity supply. But HSKRK’s flying engineering squad are already in action – where others see problems, they see opportunities.

The legal red tape is almost in place and now the founders are busy looking for sponsors and people who want to contribute to the idea.
Remember: hackers don’t steal your bank details or tap into your laptop camera. They can, however, make your TV recognize faces, disassemble and assemble your bike again (without losing any parts in the process) or help you knit a sweater.

The Krakow ministry of geekdom will open in the coming weeks. You just need to knock on the door, provided it hasn’t identified and let you in already.