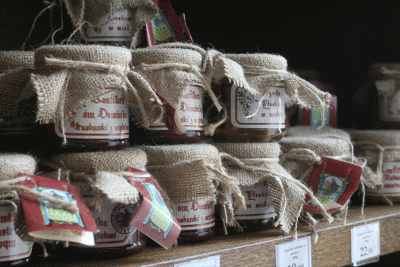 Can a clergyman sell us something harmful?According to the weekly magazine “Wprost,” most of us do not think that is possible.”Wprost” says we expect such products to have “divine” benefits. In monastic libraries are hundreds of recipes for wines, beer, vodkas, liqueurs and herbs. These are true treasures in an era of natural medicine and ecological products. The most popular are with rum and named “Brzyzewska jam.”There also are “Forest Fruits with vodka.

“More than 200,000 of these products have been sold by monks.The income supports 40 brothers and has helped rebuild a part of the monastery that had been destroyed. Secular firms can profit, too, from selling these products.”Wprost” mentions, for example, Krakow’s “Kredens” store, which is selling products made from mushrooms from a priest, Alojzy Goralik.

Poles’ appreciation of these products is displayed in the various cookbooks written by monks.More than 400,000 copies have been sold. “Wprost” says monks also are licensed to brew beer, such as “Frater,” “Paulaner” and “Fransiskaner.” Unfortunately this builds a stereotype of a monk who only eats and drinks. Of course, this isn’t true. The food and drink sales just allow the monks to maintain their normal lifestyles.