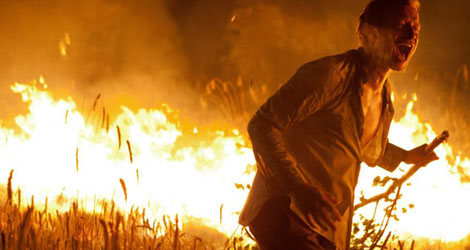 Although quiet for a decade, nobody believed that Władysław Pasikowski would give up directing feature films for good following the poor reviews of his gangster movie Reich (2001). During this break, Pasikowski has kept his directorial muscles in shape with the Polish crime series The Cop before scripting the highly unsatisfying Hans Kloss: More at Stake than Death (2012).

With a hint of intellectual snobbery, he is often branded  a ‘talented artisan’ by Polish critics, but Pasikowski has finally succeeded in completing his long-awaited feature inspired to the 1942 Jedwabne pogrom, erroneously attributed to the Nazis. Pasikowski was inspired by the domestic reaction to the book Neighbours, by Jan Tomasz Gross, which re-assigned the responsibility for the massacres to Poles.

Pokłosie (Aftermath, 2012) deals with the attempt made by two brothers Jozek (Maciej Stuhr) and Franciszek (Ireneusz Czop) to break the conspiracy of silence among the residents of a fictional village where a Jedwabne-style massacre had taken place. “We already have a huge number of films on the horrors committed by the Soviets and the Germans, and it’s time to say what terrible things we did ourselves,” said Pasikowski.

On another level, the tormented relationship and lack of mutual understanding between Jozek and Franciszek in their search for the truth can be read as metaphor for the Polish-Polish war. Enhanced by the warm smoothness of Paweł Edelman’s cinematography, Pokłosie smacks of the best Hollywood thrillers. On the other hand, the pathos of the mass-grave discovery scene evokes the finest bloodshed productions from Hong Kong.

Produced, among others, by Apple Film, Pasikowski’s sumptuous and disturbing comeback will reach a significant number of markets outside of Poland.