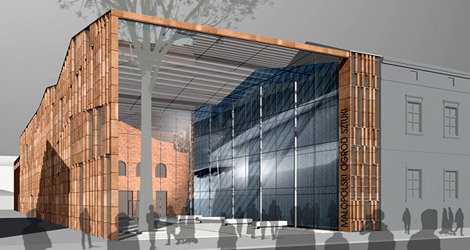 The Małopolska Garden of Arts (Małopolski Ogród Sztuk), a new multi-functional complex set in Krakow’s Old Town, will open on October 19, 2012, with a concert conducted by Polish maestro Krzysztof Penderecki. The project is based on the site of the existing stagecraft workshops of the Juliusz Słowacki Theatre.

The architectural revitalization, aimed at preventing the disused location from becoming a derelict site in the heart of Krakow, dates back to 1999. The project was carried out by the Słowacki’s Theatre and the Małopolska regional government at a cost of around 50 million zloty (12.5 million EUR), over two-thirds of which came from with EU funds.

Six years later, an architectural competition was launched to find a solution for the refurbishment of the former workshop on ul. Rajska. Four retired members of theatre staff still living in the building were provided with new flats by the regional authorities.

The restoration project was entrusted to Ingarden & Ewy, a Polish architectural firm that has contributed some of the most imaginative exhibition space designs in Poland, including Krakow’s Manggha Centre of Japnese Art and Technology and the Wyspiański Pavilion. 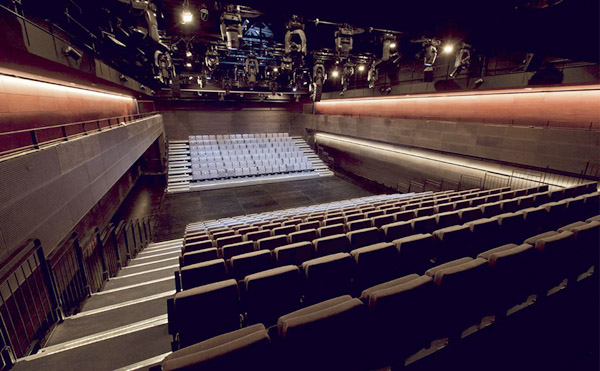 The main stage at the Małopolska Garden of Arts (Photo: Krzysztof Ingarden)

The winning designed called for the pre-existing, red brick, four flour edifice to be cloaked in a glazed, scaffold-like framework that gives the Małopolska Garden of Arts something of the appearance of rust-red greenhouse.

The building will be administered by the Słowacki’s management. Although the program doesn’t include any mention of collaboration with foreign partners, the complex is due to play a major role in international festivals held in Krakow, including the 6 Senses events organised by the Krakow Festival Office.

“The whole project is really innovative. We hope that everyone will understand the added value that triggered such an initiative,” said Krzysztof Orzechowski, the Słowacki Theatre’s director. He noted that the concept had been inspired by multi-purpose arts venues such as the Centre Pompidou in Paris and the Röda Sten Art Centre in Göteborg.

The main stage in the complex is equipped with state-of-the-art scene-changing gear that allows the configuration to be adapted easily and quickly. The Garden of Arts will also host the Arteteka – multimedia archive with a special focus on footage of theatrical performances.

The opening agenda for October 2012 is packed with concerts and other events, including an exhibition of Ingarden’s architectural projects and a special screening of Wojciech Hass’ masterpiece Saragossa Manuscript (1965).