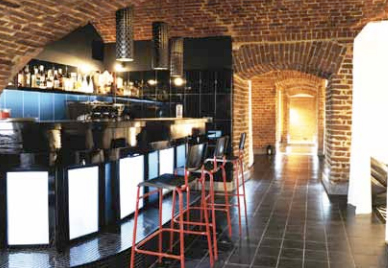 Sushi restaurants have been springing up around Poland like proverbial mushrooms in the past couple of years, and Krakow is no exception. The newest addition to the scene is Kaze (‘Wind’ in Japanese), which styles itself as a traditional Japanese restaurant serving authentic cuisine as opposed to just sushi. I blew through to find out if this was any different to the slew of sushi bars around town, or a case of the emperor’s new clothes. With a Polish/ Japanese husband and wife team running it, fresh from nine years in Japan, I had high hopes. On entering the cellar bar (slightly out of town, tucked away on a side-street off ul. Karmelicka), one is immediately transported to the Orient; all red, black and white drapes, stylish bean-bags, low black tables and lower lighting, the design is spot-on. You can choose from a number of cosy niches which are hidden from the view of other customers. The waitress issues you with a little buzzer with which to call her when you are ready to order. Ours emitted the sound of a barking dog: curiously Japanese. The menu is all in Polish at the moment, but the helpful waitress is able to translate if necessary. I ordered a Japanese beer (Sapporo) -12zl for a small bottle and śledź po japońsku (15zl) for starters. Now this is a staple of most Polish milk bars of course, and I had never imagined it to be authentically Japanese, but it appears it is. Slightly bemused by this lack of originality, I went for chicken karage (fried chicken) This arrived unaccompanied and without any decoration and when I asked for soy sauce I received a dribble in a saucer which needed refilling several times. Undeterred, I went for a soup – Ramen Shio, a kind of boullion with pasta and slices of beef and a boiled egg which, though tasty, was somewhat steeply priced at 28zl. For a main I went for tempura – deep fried vegetables and fish on a bed of rice – which was interesting enough but somewhat bland and again over-priced at 30zl with only one piece of fish. I had the maki sushi – five small pieces for 25zl, which, though passable, came with a miniscule smear of wasabi and no pickled ginger. Finally, I had Ebiyaki, small fried fluffy omelette balls with a prawn filling which were tasty but disappointingly came with a mayonnaise dip, seemingly straight out of the jar. On ordering a dessert (three of which were Polish), I was told that there were none available after the weekend. As they say, the proof of the pudding is in the eating. Somewhat crestfallen then, I left feeling that this restaurant could do so much better – and with the stiff competition in this town it will need to. Portions are far too small and prices too high for what is not astoundingly authentic or original food. For now, it’s a work in progress, which has promise but only that. But drop in at least to see those amazing drapes and while away some time sipping tea or rice wine and dreaming of the east.