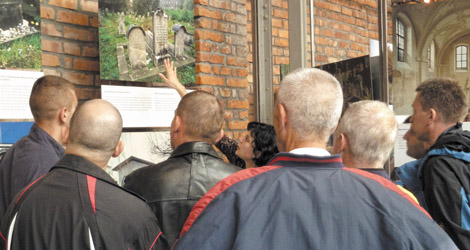 In 2003 Jewish community leaders in Poland approached the Polish prison service with a radical idea – using inmates to preserve and maintain the country’s many neglected Jewish cemeteries and monuments.

This was the beginning of the Tikkun Project (‘Tikkun’ is Hebrew for ‘Reconstruction’), a programme that has had a striking impact both on the state of the nation’s Jewish heritage sites, and the attitudes of those involved in the work.

Tomasz Wacławek, spokesman for the prison service in Krakow, spoke to the Krakow Post about his great enthusiasm for the Tikkun Project and its popularity among inmates.

“Thousands of prisoners from all over Poland participate in the project,” he said. “In Krakow alone there are over 1,500 prisoners taking part. They are anxious to learn more about Judaism, including attending lectures by Michael Schudrich [the Chief Rabbi of Poland].” 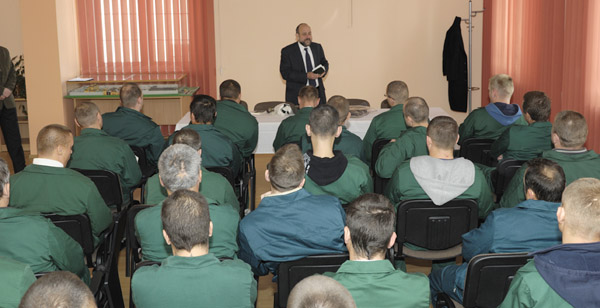 The prisoners clean Jewish cemeteries and repair broken headstones. They also visit museums featuring Jewish exhibits, tour extermination camps and sites of Jewish heritage and eagerly watch plays and films about Jewish life in Poland. One prisoner, who helps at a museum in Chrzanów, has even compiled a list of the names of the 1,500 of the city’s Jews murdered during the Holocaust.

Wacławek is proud of his role in helping to organise the Tikkun Project together with the Jewish community. He argues that the programme has introduced inmates to a whole new world of tolerance and shown them how prejudice can lead to tragedy.

“The programme is a co-operation between local authorities, Jewish communities, the Israeli Embassy in Poland and the local institutions that help to finance it,” said Wacławek. He also points out that, although Tikkun activities take place outside the prison walls and are supervised by museum and cemetery staff only, not one prisoner has tried to use this opportunity to escape. “They really love this kind of work, and every year thousands of prisoners volunteer to take part in its different activities,” he said.

Krzysztof, 45, is serving a sentence for murder in a prison in the small town of Trzebinia, about 30 kilometres west of Krakow. He has been in jail for eight years and will serve another three before he is scheduled for release. Six months ago he started working at the Jewish museum in Chrzanów as part of the Tikkun project. He assumed responsibility for the old Jewish cemetery in the town and, using his skills as a computer programmer, took it upon himself to update and develop the museum’s web site – especially the section concerning the cemetery.

Krzysztof says he has discovered a world he did not know existed, and that his work on the project means he will leave prison a better person.

“I did not have much knowledge or many opinions about Judaism before, simply because I had never met a Jew. Everything I knew about Jews I learned from conversations in school or from the Old Testament. Now, after spending six months studying Jewish history and Jewish culture in Poland, I have discovered many beautiful and interesting things,” he said.

Krzysztof is aware that Poland has a reputation for anti-Semitism in some quarters, and believes that this is because Poles do not know enough about Jewish culture. For this reason he encourages fellow prisoners to take part in the Tikkun Project.

“I visited Auschwitz for the first time when I was at school. Now, as part of the project, I visited the camp again and this time it had a completely new meaning for me. I felt and understood many things that I didn’t understand as a child. I think that anti-Semitism is mainly due to fear – the fact that many are not familiar with Judaism and have never met a Jew, and that their opinions were formed by rumours or the media.” 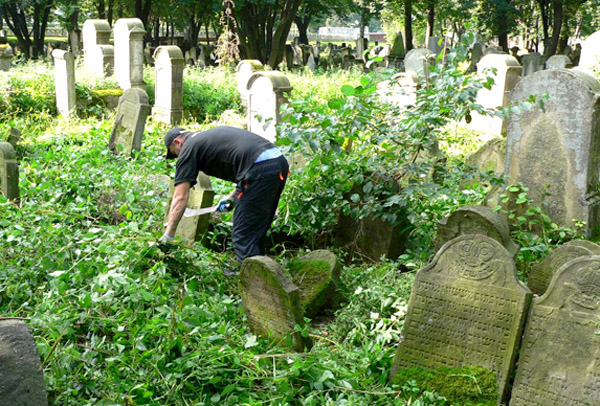 A Polish prisoner tends to a Jewish graveyard as part of the Tikkun project.
(Photo: Służba Więzienna – Polish Prison Service)

Chief Rabbi Rabbi Schudrich has been lecturing prisoners like Krzysztof for several years. He teaches them Jewish history, traditions and customs, and even Jewish ‘Halakha’ law, so that they are aware of restrictions and requirements relating to cemeteries and the dead. Wacławek has dozens of photos of prisoners listening attentively to these insights into an alien culture.

Magdalena Wojtyra is another key figure in the Tikkun project. As a psychologist for the Polish prison service, she is the one who selects inmates to take part in the programme. She told the Krakow Post that participation is strictly voluntary, but that almost nobody refuses the opportunity to take part.

“Out of the thousands of prisoners who have been offered the chance to participate, only one has refused… All of those who have decided to take part, wish to continue. I have never heard a negative remark from any prisoner. It works like this: once the prisoners meet with the staff of a Jewish museum, they are sold on the project and come to me with a request to work in that museum,” said Wojtyra.

Wojtyra believes that the programme has a positive impact on the prisoners who become involved: “I am convinced that when they leave prison, they will be much better people. They will have learned about Judaism from first-hand experience, and not from stereotypes… It’s an experience that gives them knowledge and tolerance, and a positive view of Judaism. I strongly encourage all prisoners and prison officials in Poland to take part in this extraordinary project.”

Nissan Tzur is a correspondent for Israeli daily Maariv

4 thoughts on “Reconstructing Attitudes to Judaism in Poland”