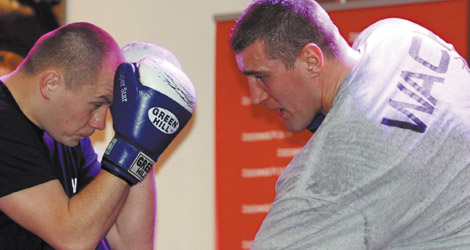 Poland may soon have its first heavyweight boxing world champion. Krakow’s own Mariusz Wach is set to battle Ukrainian Wladimir Klitschko for the IBF, WBO and IBO title belts on November 10, at the O2 Arena in Hamburg, Germany.

In his long and accomplished career, Klitschko is 58-3 while successfully defending his title in 12 consecutive bouts after first winning it with his TKO of American Chris Byrd in 2006. This will be Wach’s first challenge for the world heavyweight championship after posting a cumulative record of 27-0, including 15 wins by knockout. His ascent in the boxing world has been steady, having claimed the WBC International belt in 2011 with his fourth-round knockout of Irishman Kevin McBride. Wach’s current WBC rank is number 4.

As champion, Klitschko has already defeated two Polish opponents, Albert Sosnowski and Tomasz Adamek, knocking out each in the 10th round. In Wach, Klitschko will be matched against a boxer who is bigger and has a longer reach than him, for the first time in his professional career. The 32-year old Wach has yet to face an opponent anywhere near the caliber of Klitschko, so few pundits in the sport are giving the Pole a chance against the reigning king of the heavyweight division. Still, Klitschko isn’t underestimating his opponent: “(Wach) is unbeaten, a big puncher and has an irrepressible resolve,” he said.

Underdog Wach expressed the utmost confidence shortly after the fight was announced: “I won’t allow Wladimir to come into the fight as he likes to do. I’ll put him under pressure from the beginning. He’s going to take a lot of hard punches before I knock him out. I will be the first Polish world heavyweight champion.”

Wach hasn’t been in the ring since his sixth-round TKO of American Tye Fields last March, whereas Klitschko defended his title as recently as July 7.

Although the two fighters have taken very different paths to their November bout, Wach and Klitschko actually trained at the same gym for a brief time in 2004.