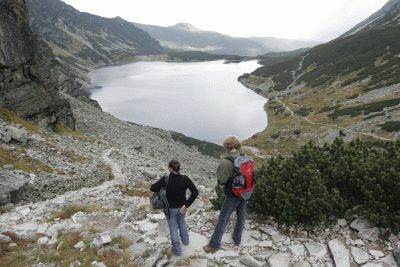 “Toward my cradle flew a Tatra wind [?] Into my heart poured a lasting fit Of longing for eagles’ flight And the pensiveness of pines Swaying in the mountain tops, Engulfed in pure quiet.”
– “A Cradle Wind,” Kaziemirz Przerwa-Tetmajer
The beautiful Tatra Mountains attract many tourists from Poland and abroad.

If you dream of reaching the sky, want a great view of snowy peaks, enjoy fresh, dry air and take pride in overcoming fatigue to climb a 2,000-meter peak, the place and time are perfect! The Alps-likeTatras are the highest range of the Carpathian Mountains and lie along Poland’s border with Slovakia, with the 2,655-meter (8,711-foot) Gerlachovsky peak in Slovakia and the 2,499-meter (8,198-foot) Rysy peak in Poland. The Tatras’ biggest lake is named Morskie Oko, which means “Eye of the Sea,” derived from an old legend that the lake was connected by an underground passage to the sea. The popular area is connected to the town of Zakopane by a 33-kilometer road. Stunning valleys like Chocholowska or Koscieliska attract tourists and provide passage to the high mountains.

Surprisingly, the best time for mountain visits is in September and October when it rains less frequently than during the three months of summer. Temperatures are cooler but not a problem if one takes a warm sweater and a coat. The other advantage of autumn trekking is fewer people on the trails and no need to stand in line to get to the top of the mountain. Everything starts in Zakopane, the winter capital of Poland and noted for its wooden architecture. Stanislas Witkiewicz’s first experiment in the famous “Zakopane Style” is the Villa Koliba, a beautiful, old wooden house. There are two ski jumps where Adam Malysz, world champion in ski jumping, can be seen during the Polish championships. With winter approaching, skiers can practice on the slopes of Kasprowy Wierch in the high Tatras and at well-groomed ski centers throughout the Podhale region. Apart from the mountains, Zakopane takes pride in its own brand of the traditional Polish highlander culture.

The highlanders are a colorful symbol of Poland just as Scotland’s highlanders are of Britain. One fantastic way to enjoy the mountains is to stay in a lodge close to the peaks and valleys. Reservations are advised for the eight mountain lodges in the Polish Tatra Mountains and others on the Slovakian border. The biggest lodge is on Hala Gasienicowa at the end of Chocholowska valley.

It’s a great feeling to finish a hard day of trekking by relaxing in a mountain shelter, drinking tea or hot wine and listening to interesting stories from other tourists, their adventures and some horrifying accidents as well. One has to remember that mountains are dangerous even when the weather seems to be perfect for climbing. While staying in the Chocholowska valley shelter, I met a tourist, Wojciech Zielinski, who was forced to stay in the high mountains overnight after the weather changed suddenly and it was too late to get back to the mountain lodge. “I was however well prepared and had a sleeping bag and a tent” Zielinski said. “But there is a rule to descend from a peak around 4 p.m. so that one isn’t caught by darkness at high altitude.” Then there is the risk posed by weather. One incident concerned a sudden weather change high in the mountains. The TOPR (Volunteer Tatra Mountains Rescue Service) received calls about lightning striking eight tourists.

“To protect ourselves during a storm we should as fast as possible get to a valley,” the tourist Zielinski said, “or if the storm catches us at high altitude one should sit on a backpack not touching the ground with anything metal (to guard against a lightning strike).” It also is wise to know how to signal for help. It can be a sound signal like whistling – six sound signals per minute, then a one-minute break, then six signals, etc.

Someone receiving your call can reply with three signals per minute, then a one-minute break. If one has a flashlight, the light signal is the same: six signals per minute, then a one-minute break, then six signals. If you have a cell phone, you can dial the TOPR rescue number at 601-100-300. Physical fitness also is important for mountain activities. “Once on a trail,” Zielinski said, “I met a woman who was tired after a few hours of walking in the high Tatra Mountains. Even after taking a break, she was unable to stand up and walk. I helped her to get to the lodge where she spent the night, although she was supposed to get back to Zakopane.” Some of us can get in shape by going to Gubalowka hill, which one can climb from the lower part of Krupowki and practice a little bit before going to the high mountains.

There’s also a funicular railway for those who want a faster route to the top of the hill. The wonderful view from the peak spreads out on the Tatra range to the most famous peak, Giewont. The peak’s outline resembles the posture of the sleeping knight. According to legend, Giewont was supposed to wake up one day and liberate the country from servitude, especially during the times of annexation. Many passes through the Tatras have played an important part in communication and commerce. They were used during World War II by messengers who delivered materials for the Polish underground resistance.

These were usually Tatra guides, skiers and highlanders like Stanislaw Marusarz, Stanislaw Roj Gasienica and Jan Bobowski. They were smuggling money, operation reports, weapons and also people from Zakopane to Budapest. Jozef Krzeptowski, known as the “king of couriers,” did the Zakopane-Budapest trail more than 50 times. The Tatra Mountains were also a treasure chest. “Beginning in the 15th Century, gold and silver, as well as copper and iron, were extracted” Zielinski said. Apart from remnants of the mining industry still in the mountains, the early residents of the Tatras have left other traces like old cottages and sacred art relics.

The Tatras are also home to animals like marmots, chamois, bears and other creatures. We should be aware that this is the time of year when bears prepare themselves for the winter, and one of them might surprise you on a trail, looking for food. If you meet one, just stay calm and leave quietly. The Tatra Mountains have been an inspiration for many artists. Karol Szymanowski, a pianist, strongly attached to Zakopane, composed his pieces to poems about the Tatras written by Kazimierz Przerwa-Tetmajer. Historic Villa Atma was once the home of Szymanowski, a staunch proponent of Highlands culture, who introduced many folk elements into his compositions over the years. A famous artist of the post-war era, Wladyslaw Hasior, spent much of his life in Zakopane.

A gallery conceived and created by Hasior is the best possible introduction to his peculiar world. It’s easy to see what makes the Tatras exceptional when we walk through the valleys and then climb the higher parts of the range. Their mystery is highlighted by poets, climbers and others who see the natural beauty and find a place to breathe deeply and freely – and more peacefully than down there in the cities. When you reach the peak, you tower over everything you left behind and you feel powerful. At the same time, you are filled with respect and awe for the soaring landscape around you.