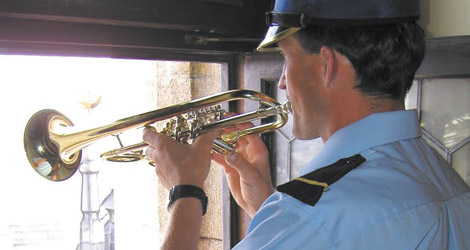 If the trumpet call that has been played from the top of the Mariacki church tower every hour for hundreds of years sounds a little different, it could be because the city has issued new instruments at a cost of 6,000 złoty each.

The hejnał mariacki is a sound familiar in the city, drifting out across the square in the wake of the hourly church bells, and halting abruptly in memory of the legendary watchman who was shot in the throat with an arrow as he played to warn Cracovians of a Tartar attack.

Nowadays, the tune is played by members of Krakow’s fire service, who jokingly refer to their instruments as like their wives – adding with due caution that wives are less likely to change or wear out. The firefighters welcome visitors to watch them play, on Tuesdays, Thursdays and Saturdays, and always draw such crowds as can squeeze into the room at the top of the Mariacki tower. They are often asked to pose for photos, and sometimes even receive requests for autographs.

The trumpets, though, wear out. And with the oldest having racked up 15 years service, the major of Krakow Jacek Majchrowski has granted the money for two new instruments.