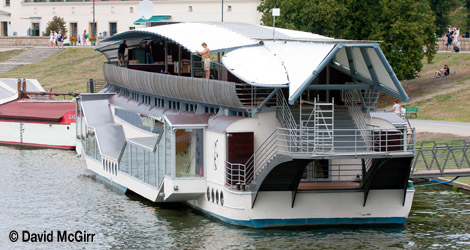 City authorities and the owner of the newest and largest boat on the Wisła river are squaring up for a legal battle – after the barge was moored illegally at the foot of Wawel castle.

The Stefan Batory is a floating conference centre, able to accommodate 400 people on three levels, and measuring 9.3 metres tall and 54 metres long.

It was originally moored opposite the castle, in front of the Manggha museum, and even there its presence drew criticism. The barge was said to be too large, and out of character with the river. The city artist, Jacek Stokłosa, said that it looked like an aircraft carrier – and Krakow Post readers were no less critical, with one comparing it to a giant zit.

Now the row over the Stefan Batory has intensified, because it has been moved across the river, and currently rests in the bend beneath Wawel castle. The move is illegal, because barge owner Lech Będkowski does not have permission to moor there, nor does it have the blessing of the city artist.

However, the newspaper Gazeta Krakowska reports that Mr Będkowski said he had moored the Stefan Batory beneath Wawel in spite of this, in order to prove to the authorities that it fit the space perfectly and would not look out of place.

The Office of Infrastructure and Sport (ZIS), which oversees moorings on the river, has demanded that the barge be moved. Halina Szłapa, spokeswoman for ZIS, said it was not possible to moor such a barge without the ‘positive opinion of the city artist’, and that this opinion had not been forthcoming.

Nor is it likely to be, for Mr Stokłosa said: “The barge is like a giant aircraft carrier… I cannot give consent to something like that.”

Mr Będkowski was convinced that the current spot was perfect for the Stefan Batory. He said: “It is moored there to show that this modern, beautifully crafted object fits well with the bend in the river. We want to convince the city artist. The barge does not obscure the castle, just the shabby tenements on ul. Powiśle. Tourists like it, they take their pictures in front of it.”

ZIS has not yet called for the forcible removal of the barge, and has suggested a new spot for the Stefan Batory, near the group of restaurant-bar boats around the footbridge that connects Kazimierz to Podgórze.

Mr Będkowski said he would prefer to stay at Wawel, adding that modern architecture could complement historical buildings. But he also said that he may take the Stefan Batory to Rotterdam, and has booked a berth there.

The floating conference centre, a fixed hot air balloon, a Ferris wheel and an open air swimming pool are the most recent additions to Krakow’s riverscape – and now there are plans to reinvigorate the once-thriving industrial Wisła river still further by allowing more boats operating as restaurants and hotels to moor along the stretch that passes through the city centre.

In the past two years the river has become a focal point for entrepreneurs willing to risk a złoty or two on what they see as the next tourist hot-spot in the city.

Krakow’s council, noting the trend, is now considering renting mooring points on a much grander scale. Although it will not be possible to moor houseboats on the river in the city centre, entertainment facilities could be allowed.

But Filip Szatanik, spokesman for the magistrate, said precautions would be taken to ensure the amenity of the river was not spoiled.

Mr Szatanik told Gazeta Wyborcza: “The section opposite the Forum hotel and Wawel Castle will be excluded. On the remaining length of the river, mooring piles have already been prepared by the Board of Sports and Infrastructure, at which floating restaurants and hotels will be able to moor.”

One thought on “The Stefan Batory Barges In”