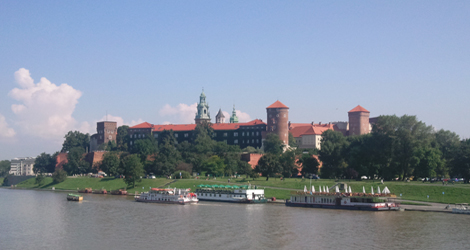 A floating conference centre, a fixed hot air balloon, a Ferris wheel and an open air swimming pool are the most recent additions to Krakow’s riverscape – and now there are plans to reinvigorate the once-thriving industrial Wisła river still further by allowing boats operating as restaurants and hotels to moor along the stretch that passes through the city centre.

In the past two years the river has become a focal point for entrepreneurs willing to risk a złoty or two on what they see as the next tourist hot-spot in the city. Krakow’s council, noting the trend, is now considering renting mooring points on a much grander scale. Although it will not be possible to moor houseboats on the river in the city centre, entertainment facilities could be allowed. But Filip Szatanik, spokesman for the magistrate, said precautions would be taken to ensure the amenity of the river was not spoiled.

Mr Szatanik told Gazeta Wyborcza: “The section opposite the Forum hotel and Wawel Castle will be excluded. On the remaining length of the river, mooring piles have already been prepared by the Board of Sports and Infrastructure, at which floating restaurants and hotels will be able to moor.”

But recent additions to the stretch of the Wisła passing through Krakow city centre have already caused controversy – sparking fears that wholesale letting of moorings could seriously damage one of the city’s most treasured spots.

As reported in the August edition of the Krakow Post, the Stefan Batory, a floating conference centre that looms 9.3 metres high and 54 metres long, has prompted angry responses from some. The city artist, Jacek Stokłosa, told the Polish media last month that the boat looked like an aircraft carrier. He said he had refused to authorise a mooring at the foot of Wawel Castle, but the Stefan Batory has since moved from its spot next to the Manggha museum to take up just such a berth.