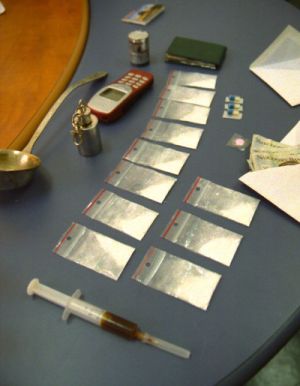 A 41-year-old Turk was detained earlier this month in connection with the discovery by Customs officials at Hrebenne of 118 kilograms of heroin apparently being smuggled into Poland in a truck carrying household appliances for a Polish company. The case has been taken over by the Central Investigating Office in Lublin.

The value of the smuggled drugs is nearly 24 mln zloty (6.35 mln euro) on the black market. The truck drove up to the Customs point at the Hrebenne border at Hrebenne on Poland’s eastern border with Ukraine late evening September 12. The Customs officer who checked the truck became suspicious and performed a special X-ray test. Alerted by what they described as an odd-shaped cabin on the truck, officers discovered 269 packages containing a beige substance. The hiding place had been especially constructed for the drugs, which analysis determined to be heroin.

It was the largest drug cache ever stopped on the eastern border, police said. An investigation will attempt to establish the truck’s intended destination and perhaps reveal the contact person there. Detailed laboratory research will determine the drugs’ origin. The district prosecutor’s office in Lublin will decide the fate of the truck driver. If convicted he could face 15 years in prison.

In the first six months of 2007, Polish police investigated 39,466 drug crimes, among them 340 concerning large amounts of drugs intended for illegal importation, exportation or transportation through Poland’s or other countries’ territory. During the period police seized 35 kilograms of heroin. According to Interpol, the International Criminal Police Organization, two primary routes are used to smuggle heroin. One is the Balkan Route, which runs through southeastern Europe, and other the Silk Route, which runs through central Asia.

The anchor point for the Balkan Route is Turkey, which remains a major staging area and transportation route for heroin destined for European markets. The Balkan Route is divided into three sub-routes. The Southern Route runs through Turkey, Greece, Albania and Italy; The Central Route runs through Turkey, Bulgaria, the former Yugoslav Republic of Macedonia, Serbia, Montenegro, Bosnia and Herzegovina, Croatia, Slovenia and into either Italy or Austria. The Northern Route runs from Turkey, Bulgaria and Romania to Austria, Hungary, the Czech Republic, Poland or Germany. Large quantities of the smuggled heroin are destined for either The Netherlands or the UK. Although the Balkan Route is considered the primary supply line for Western Europe, Afghan and Central Asian traffickers smuggle heroin along the Silk Route into Russia, the Baltic States, Poland, Ukraine, the Czech Republic and other parts of Europe. Tajikistan, Uzbekistan, Kyrgyzstan, Kazakhstan and Turkmenistan are vital transit countries, with an estimated 24 percent of Afghan heroin smuggled along this route.

Europe remains the primary market for heroin, accounting for a third of the world’s opiate consumption. Despite the increased production in Southwest Asia, the European demand for heroin appears stable. Afghanistan (Southwest Asia), Myanmar, Thailand and Laos (Southeast Asia), and Colombia with Mexico (Latin America) are the main regions of heroin production.

Brown sugar, Big H, Blacktar, Smack and Junk are among the street names or slang terms for heroin, a highly addictive central nervous system depressant. The drug is processed from morphine, obtained from the opium poppy. Heroin can be used in a variety of ways. It can be injected into a vein (“mainlining”), injected into a muscle, smoked or snorted as powder via the nose. It is a depressant that affects the brain’s pleasure systems and interferes with the brain’s ability to perceive pain. The short-term effects appear soon after taking the drug. The person reports feeling a surge of euphoria accompanied by a warm flushing of the skin, dry mouth and heavy extremities. Following initial euphoria, the user goes “on the nod,” an alternately wakeful and drowsy state. Mental functioning becomes clouded because of the depression of the central nervous system. Other effects include slowed and slurred speech, droopy eyelids, impaired night vision, vomiting and constipation. Long-term effects appear after repeated use. Chronic users may develop collapsed veins, infection of the heart lining and valves, abscesses, cellulitis and liver disease, as well as pulmonary complications, including pneumonia. With regular heroin use, tolerance develops and abusers must use more and more heroin to achieve the same intensity or effect.