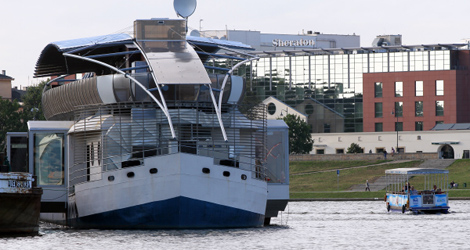 A new floating conference centre – the largest barge to dock on the banks of the Wisła river – is being constructed opposite Wawel Castle, and has already sparked controversy.

The Stefan Batory, named after one of Poland’s greatest kings, will be able to accommodate 400 people at a time. It has three levels, forming the conference space, restaurant and terrace café, towers 9.3 metres above the water, and measures 54 metres in length.

Proud designer Adam Paniak told Gazeta Wyborcza that the barge would be covered with white canvas sails when it was complete. He said: I wanted to create a piece of nice space with a unique expression. I wanted this boat stand out from others in form.”

But the boat has drawn unwanted attention from some quarters – with complaints from Krakow’s head artist, and from members of the public, to local Polish media and on internet message boards. One poster on the Skyscraper City website said: “When you are on the boulevard at Manggha, it obscures views of Wawel. In turn, from the boulevards at Wawel, it covers Manggha. There were also comments concerning the size of the barge – which would be unable to fit under any of Krakow’s bridges once construction was complete.

“They wanted me authorise the mooring of the barge at Wawel, but I firmly refused,” said the Chief Artist of Krakow, Jacek Stokłosa, adding “For now it looks like an aircraft carrier. The Wisła river is only for those boats that resemble traditional forms.”

The Stefan Batory has four mooring piles on the river. The city authorities have heard complaints, but adopted a ‘wait and see’ policy. Halina Szłapa, of Zarządu Infrastruktury Sportowej (the Office of Infrastructure and Sport), said more than a lease was needed.

She added: “The owner of the craft must provide us with a set of documents and certificates, including the positive opinion of the city artist.”

There are currently some 11 boats docked on the Wisła in Krakow, most of which are bars or restaurants.

One thought on “‘Aircraft Carrier’ Barges Onto Riverside”