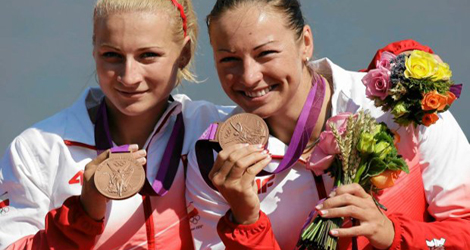 Poland won ten medals at the London 2012 Olympics, matching their haul in Beijing four years ago – with two golds, two silvers, and six bronzes. The winners were Tomasz Majewski (shot put – G), Adrain Zieliński (weightlifting – G), Sylwia Bogacka (shooting – S), Anita Włodarczyk (hammer throwing – S), Magdalena Fularczyk and Julia Michalska (rowing – B), Bartłomiej Bonk (weightlifting – B), Damian Janikowski (wrestling – B), Przemysław Miarczyński (sailinboard – B), Zofia Klepacka (sailboard – B), and Beata Mikołajczyk and Karolina Naja (pictured; canoeing – B).
Bogacka took the first medal, less than 24 hours after the opening ceremony. Majewski was the first to win gold.
Marek Stanny, Naja’s trainer in Bydgoszcz, said she was a role model for young athletes.
He told Polish journalists: “From the beginning when I started training her, I could see that she had character… we are very proud of her. We moved the children’s training to watch Karolina’s race with them. We  wanted to show them what you can get from persistent work. It’s such extra motivation for young people, because after all, kayaking is a very demanding discipline.”
Picture: Armando Franca/AP