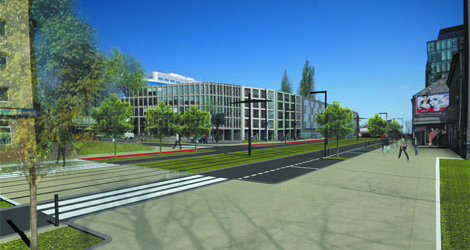 More parking spaces, wider pavements, cycle paths and green spaces… this, according to the newspaper Gazeta Krakowska, could be the future look of one of the main routes into Krakow city centre.

The newspaper reports that the organisation PLM (Przestrzeń-Ludzie-Miasto), working with architects and urban planners, has drawn up plans for the redevelopment of Mogilska.

The project website, alejamogilska.pl, states: “We all know Mogilska. Today, it is by and large boring and grey, with holes in the road and very narrow pavements on both sides. Although it is located in the geographical center of the city, one cannot go shopping here (there are no shops), live comfortably (because of noise, fumes, lack of greenery), or ride a bike (there is no cycle path). Nor are there parking spaces.

“We are deeply convinced that it is possible to simultaneously increase the capacity of the street, increasing the number of parking spaces, adding a lot of green, convenient bicycle paths and wide pavements.” 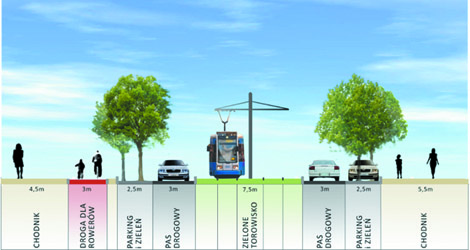 The PLM proposals include a central tram line at 7.5m wide, two traffic lanes and two parking lanes, a two-way cycle path, at pavements between 4.5m and 5.5m wide. The project’s authors cite similar schemes that have worked well in areas of other European cities, such as London, Dublin and Stockholm.