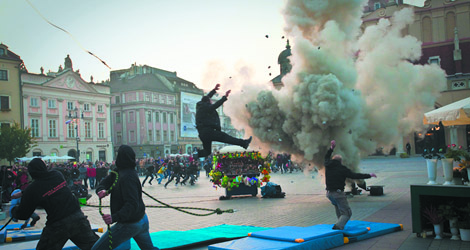 It’s a scorching hot afternoon on the set of The Rhythm, the latest Bollywood feature to be shot in Krakow.

A corpulent cameraman is scooting back and forth with unexpected agility across the Market Square. The Polish-Indian crew are stuck on a tracking shot, closing-in on two actors playing Hindi students sipping drinks in front of St Mary’s church. The sequence has been repeated over and over again, but tempers remain under control.

According to the screenplay, the students fall in love after arriving in Poland to study at the Jagiellonian University. The young Indian stars are surrounded by a group of ‘gora,’ white European walk-ons, populating a reconstructed pavement bar. They have been recruited by the Krakow Film Commission, which is supporting the shooting of the latest Bollywood feature to be drawn to the city’s stunning backdrops and infrastructure.

Anna Zajączkowska, Polish line-producer for the romance being shot by Indian director Vivek Kumar, is doing her best to keep the set running smoothly. “I’ve already worked for Bollywood as a location manager for the action movie Azaan, which was shot partly in Krakow,” she says, adjusting a makeshift turban fashioned from a shirt. 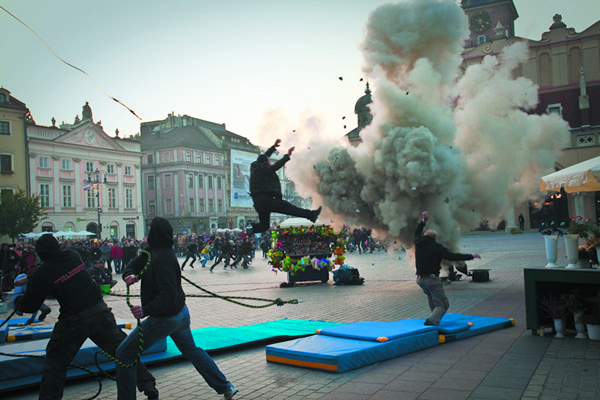 The Indian crew have comforts from home to get them through the day, pulling out thermos flasks full of mixed-spice tea as the Polish goras sweat in the sun. During the filming of Fanaa (2007), which was shot in the Tatra Mountains, the Indian crew brought a cricket set with them and played in the snow.

Centred on the love affair between a mountain guide and a blind Kashmiri girl, Fanaa was the first Bollywood picture to be shot in Poland. Despite wintry weather that obliged the crew to wear balaclavas, the Mumbai troupe was impressed by the technical skill and helpfulness of their Polish hosts.

On their journey through the Małopolska region, Bollywood big wigs were also enraptured by Krakow, which had not been included on their list of possible locations. “They were looking for Kashmiri scenery in Poland, but ended up discovering a city full of exotic charm,” explains Polish cinéaste Jakub Pączek.

The sudden interest in Indian film in Poland can be seen as a long-deserved payoff for a dedicated group of Poles who have followed developments in Bollywood for years. According to tour-guide and India enthusiast, Kamila Szanduła, the successful screening of Kabhi Khushi Kabhie Gham… (2001), starring Amitabh Bachchan and Shahrukh Khan, in 2004 inaugurated the local vogue for Bollywood. 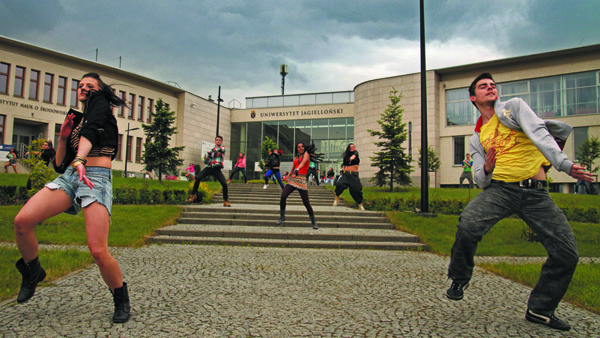 The popularity of Hindi romances has also been fostered by the Polish press, which has experimented with distributing inexpensive DVD supplements to boost sales and circulation. Agora, which publishes Gazeta Wyborcza, sought to draw readers to the short-lived daily Nowy Dzień by distributing Bollwywood features for one złoty.

Indian superstar Amitabh Bachchan’s appearance at the Off Plus Camera Film Festival in 2011 represented a milestone in relations between Poland and Bollywood, and created a buzz among Indian producers looking for exotic locations at reasonable cost.

Krakow narrowly defeated Prague as the chosen location for the filming of Azaan (2012), mainly thanks to the perseverance of the Krakow Film Commission and the range of services they were able to offer the Indian crew. In October 2011, the Old Town was briefly transformed into a Bollywood fantasy, with dramatic pyrotechnics and perilous chases across the balconies overlooking Plac Szczepański.

Things do not always go smoothly, especially given the unfamiliarly strict approach to ‘official’ permission found in Poland. “At one point, the Indian crew were surprised to hear that special permission was required to film in Saint Mary’s Church,” explains Anna Zajączkowska.

On the other hand, labour costs in Poland are significantly lower than in other European markets. “Finding a crew elsewhere in Europe willing to work overtime and for more than 12 hours per day can be very difficult,” she adds.

The day is almost over and the Polish-Indian crew have done their best to take advantage of every moment of available light. Director Kumar is pleased with the day’s shoot, but the Indian reputation for break-neck film production shows through: “The hosting crew have been terribly professional, but we could have shot more footage today,” he muses, as technicians dismantle the equipment.

One thought on “Bollywood Beats a Path to Krakow”