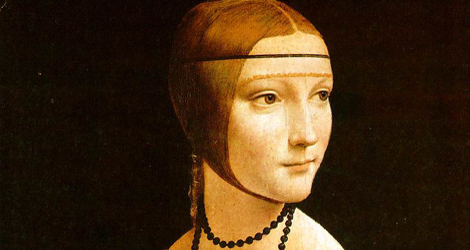 The price of getting Poland’s most valuable painting back on display in Krakow has been revealed as 1 million złoty – which will be paid by the government to the foundation which owns the work by Leonardo da Vinci.
The money will go to the Czartoryski Foundation, and will pay for not only permission to display the Lady with an Ermine at Wawel Castle, but also the use of trademarks associated with the Foundation. However, the Ministry of Culture cannot pay the Foundation – or any other – directly,  because of strict rules protecting against corruption. Instead, the Ministry will make grants to Wawel and the money will then be transferred to the Foundation.

Ministry spokesman Maciej Babczyński told the newspaper Dziennik Polski that the payment secured the right to use the terms ‘Czartoryski Musuem’ and ‘Czartoryski Foundation’. He added: “According to the contract, the payment… will be for statutory purposes, in particular the task of revitalising the Princes Czartoryski Museum building and the preparation of its permanent exhibition.”

Da Vinci painted The Lady with an Ermine in the late 15th century, while working for the Duke of Milan. The woman in the picture is said to be Cecilia Gallerani, the Duke’s mistress.

Art experts have ensured it is displayed in optimal conditions to ensure its preservation, in a small room at Wawel with a constant fixed temperature of 18 degrees, and strict controls on lighting and humidity. Up to 20 people can view the picture at a time. Tickets cost 10zł (8zł concessions). It is advisable to book in advance, as the popularity of the painting means that queues are likely. It will stay at Wawel until the Czartoryski restoration is complete.