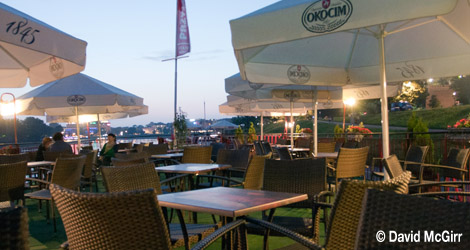 It should have been perfect. A beer or two in the open air, bobbing gently on one of Europe’s great rivers under the sunset glowing walls of graceful Wawel Castle.

The Krakow Post’s Bar of the Month team had waited a long time for this – since that day in antediluvian January when the idea of judging Krakow’s floating bars had first been raised. Back in that ice-locked epoch, the thought that, one day, we would be lazing on the river enjoying the ebbing heat of a June day became a Shangri-La of summer boozing.

The evening started well with a display of local lunatics bobbing about on the Vistula in inflatable rafts and jury-rigged canoes. Apparently it was art. Certainly it was amusing, and put us in the mood for a cold beer on a warm boat.

Swarming up the gangplank of the first floating gaff we came to, we prepared to drink in the sophisticated riverine atmosphere, and a lot of its beer. Disappointment asserted itself rather rapidly. Despite indisputably floating on a river, the place somehow managed to avoid any of that delicious sense of messing about in boats. Instead, it felt like a un-excitingly dilapidated bar with a slightly curved floor. There was Wawel, spotlit and magnificent, there was the river, lapping dutifully, but where was the magic?

Saddened but not disenchanted, we pulled for the lights of the next vessel. It was the same. There was nothing obviously wrong with the place, but there was also nothing about it that managed to take advantage of what should be an irresistible setting. Instead of feeling charming, it felt peripheral and dull. The lack of life around the river is partly to blame, but these bars were doing little to help.

The scuttlebutt was that brighter, better floating bars lay just around the next bend in the river, but I don’t think any of us really believed it. Abandoning ship and dreams, we tramped back into town, bad tempered and bickering. The situation was not helped by the fact that we chose to head up ul. Dietla. And so it was that, late one Friday evening, the BOTM team found itself tottering like shipwreck victims along what is both one of the longest streets in Krakow and the only one that doesn’t have any bars on it.

This edition’s Bar of the Month? The first one around the next bend in the river – one day we will find it.