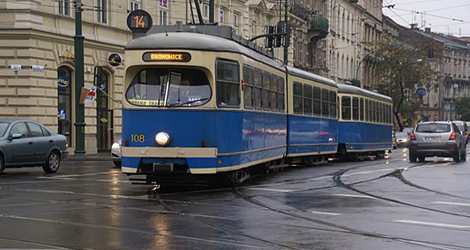 When a drunken man started attacking the doors of a bus in Krakow city centre, the passengers decided that they were having none of it.
The local Polish language newspaper Gazeta Krakowska reports that the man, who boarded the bus, then started kicking the doors. Shocked passengers first alerted the driver, but then stepped in themselves to restrain the man, preventing further damage to the vehicle. The City Guard was on the scene within five minutes, and the newspaper cites Guard spokesman Marek Anioł as saying: “It’s an attitude worthy of emulation.” Overall, it was estimated that about 2,000zł worth of damage was caused to the bus, and the man now faces court – with the prosecution preparing CCTV recordings of the incident as evidence.
It didn’t go so well for another public-spirited passenger in a separate incident. When a man started using abusive language at volume, he asked the bus driver to intervene. His fellow-passengers, who had initially shared his annoyance at such unacceptable behaviour, gradually turned against him as they realised that, by ‘doing the right thing’, he had caused a 20 minute delay to their journeys as the bus driver waited for police to arrive and escort the offender from the vehicle.
But what would you have done in either situation? And what about public transport etiquette in general? When someone pumps up the volume on their MP3 player on the bus, opens or shuts a tram window without first asking fellow passengers, or rests their muddy feet on the train seat next to you, is this something that makes you fume? Do you step in to prevent anti-social behaviour? Or do you hold your tongue, knowing that your intervention may lead to delays, turning your already annoyed fellow passengers against you?