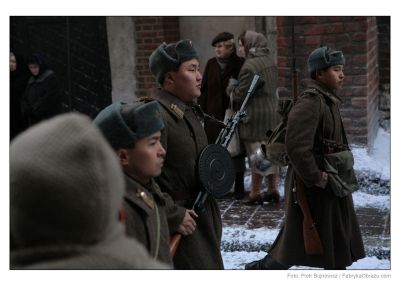 The words that renowned director Andrzej Wajda used to explain why he made the film “Katyn” crackled with poignancy.

“It was my sad duty to make this movie,” the 81-year-old Wajda said. He meant both a duty to his country and his family.

The movie is about the Katyn massacre, the Soviet secret police murders of thousands of Poles during World War II. One of the victims was Wajda’s father, a military officer. So the movie deals partly with his family’s story.

The Nazis’ surprise invasion of Poland on September 1, 1939, sparked World War II. Sixteen days later on September 17, the Soviet Union, which had signed a non-aggression pact with Germany, invaded Poland from the east. The invaders used murder and mass arrests to terrorize the population.

The bloodiest point of the Soviet occupation came in April 1940, when the Soviets murdered an estimated 15,000 to 22,000 Polish prisoners. Many of the killings occurred in the Katyn forest. Others took place in prisons in Kalinin – today known as Tver ? and Kharkiv, which is now part of Ukraine. There were some murders in other locations as well.

The victims included about 8,000 military officers, who were collectively a major source of the country’s intellectual power and the elite of society. By killing them, the Soviets eliminated people they feared or despised – military officers who could lead forces against the Red Army and intellectuals who could threaten the Communist system with ideas.

The Nazis turned on the Soviet Union in June 1941, invading Soviet territory. With the Soviets now their enemies, the Nazis revealed the mass graves in 1943. The Soviet propaganda machine, as could be expected, maintained that the Germans were behind the massacre.With the Soviets in charge of Poland after the war, the truth didn’t surface for four decades.

The Solidarity movement led to a flowering of freedom in Poland that allowed the real story to surface in 1989. Then, in 1990, Soviet Premier Mikhail Gorbachev finally admitted Soviet responsibility for the atrocity.

Wajda’s world premiere was in Warsaw on September 17, the 68th anniversary of the Russian invasion of Poland. Besides many Polish dignitaries, many families of victims watched the showing. The movie will be released in the U.S. and Europe later.

“Katyn” is the first feature film about the genocide. Since it deals with Wajda’s parents, it is also a personal artistic statement. In fact, he dedicates the film to them. His mother refused for years to believe that her husband would never return.

The movie begins with the signing of the Ribbentrop-Molotov Pact between the Germans and Soviets on August 23, 1939. By assuring the Germans that the Soviets wouldn’t fight them if they invaded Poland, the pact set the stage for a blitzkrieg of Germany’s eastern neighbor.The pact also gave the Soviets a green light to invade Poland without tangling with Germany.

The movie focuses not only on the fate of the Polish officers who were slain but also on how their wives, parents and children waited for years for their return. It also shows how the Soviets denied responsibility for the murders for decades, and how the families who learned the truth were afraid to speak out.

The cast includes top stars of the Polish cinema: Maja Ostaszewska, Andrzej Chyra, Jan Englert, Artur Zmijewski, Magdalena Cielecka, Danuta Stenka, Maja Komorowska and Stanislawa Celinska. Because of his age, Wajda, who was awarded an honorary Oscar in 2000 for his lifetime achievements in cinema, admitted that “it might be one of my last movies.”