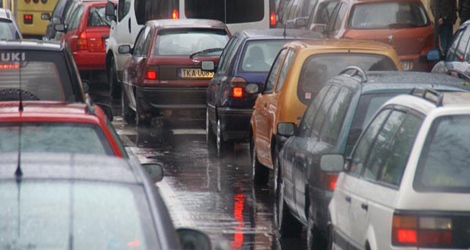 Nobody would argue that getting to school or work, or even simply getting home to Krakow’s outlying districts, is not made a lot easier by owning a car and a valid driving licence.

But how much is this convenience costing the city as a whole? The council has been quick to spot opportunities for raising money through parking fees, and it’s almost impossible to drive right into the centre and park up unless you live there. Financially, it’s a money-spinner; yet the traffic is taking its toll on the state of Krakow’s roads, and the air quality in the Małopolska region has hit dangerous levels at least twice in the past 12 months.

As people become increasingly aware of the cost versus convenience argument regarding private cars, one new report suggests a win-win situation – simply increase the level of car-sharing.

According to Wiesław Starowicz, city advisor on urban management, the average current car share rate at rush hour – peak times for journeys to and from work and school in Krakow – is 1.46 people per car. Increase that to two per car, and traffic on Krakow’s streets can be cut by 30 per cent, Mr Starowicz argued. Speaking at a press conference, Mr Starowicz said a pilot scheme would be rolled out to schools in Krakow and nearby towns in September. The aim would be to encourage staff at companies, and parents and pupils at schools, to create their own ‘mobility plans’. Later developments could include the installation of cycle racks, and better city centre access for ‘hybrid’ cars.

2 thoughts on “Driven to Distraction?”