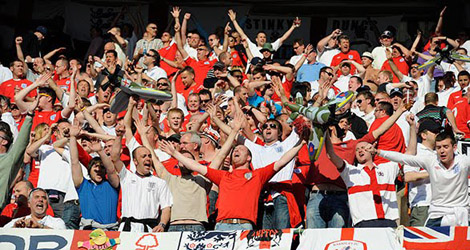 At the height of Euro 2012 mania last month, the Krakow Post spoke to a team of UK police officers who were in Poland to help local law enforcement agencies identify potential English troublemakers.

KP: What is your role here in Krakow?

UK police: To liaise with Polish police and advise them on the behaviour of England fans. To try to interpret fan behaviour for local police. We have no powers here, but we will intervene and speak to fans.

For example, we were out the other night and saw a group of lads whose language was getting a bit choice. We approached them and gave them a bit of friendly advice. We told them we were with the Polish police, and that they might want to ‘have a conversation’ if they didn’t moderate their behaviour.

UK police: Exactly, early intervention to nip things in the bud. Knowing UK police are here removes any sense of anonymity. We can do checks back home. If you cause problems here, you can be punished in the system back home. You can get a football banning order for offences committed here.

Banning orders are a really powerful tool. The driving force behind them was the behaviour of fans at previous tournaments abroad, which was embarrassing for the country. There has been a massive effort to curb this sort of bad behaviour.

It is now very rare that we get any disorder at England football matches. We have not had a football related arrest in any of the last eight England games abroad.

KP: How do you do your job here in Poland?

UK police: We work in two ways. We support England fans by advising and looking after them. A lot of time is spent liaising with fans, advising them about areas to avoid, trying to nip things in the bud. The second part of the job is actively seeking troublemakers with a view to obtaining bans and prosecutions.

There are always three groups of fans. Those who never cause any trouble, those who are determined to cause trouble, and the group in the middle – those who may start misbehaving after a few too many drinks. We always try to engage with these people.

KP: Have there been any arrests or any incident that have caused the FA to impose sanction?

UK police: There has not been a single arrest. England is one of the few nations that hasn’t had anyone arrested, which is remarkable. Long may it continue.

KP: How have you found working with the Polish police?

UK police: The Polish police have been very good. They deal with people in a similar way that we would. It’s one of the best deployments I have been on, in respect of planning, liaison and police attitudes.