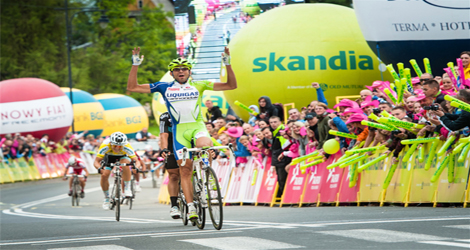 First it was misery at Euro 2012, then Agnieszka Radwańska fell at the final hurdle at Wimbledon. On Monday,  Michał Kwiatkowski lost the chance to become the first Pole ever to win the Tour de Pologne cycle race.

Going into the final stage in Krakow, Kwiatkowski was a second ahead of the field, and only had to retain that lead in order to win the race. But it was the Italian Moreno Moser who won not only the stage but the competition. But Moser needed bonus points to claim the title – and Kwiatkowski can take comfort in the fact that he is now only just behind the Italian in the rankings.

Nevertheless, it was the bonus seconds awarded to Moser in the penultimate stage that ultimately proved to be Kwiatkowski’s undoing. The Pole said: ” I did everything possible to hang on to the yellow jersey and I thank all my team mates for an excellent job. In the last metres, Moser took off super strong and I really did my best to stay on him.”

For Cracovians, the final stage of the Tour de Pologne in the city was a great honour – or a pain. Sports fan Agnieszka D told the Krakow Post “It’s perfect, the whole country is looking at Krakow, and they can see how beautiful our city is.” However, for Piotrek K, it was a different story.

“I tried to get from the market square to Bracka, and had to walk half way down Grodzka before I could find a place to cross the road,” he said.

2 thoughts on “Bring on the Olympics”